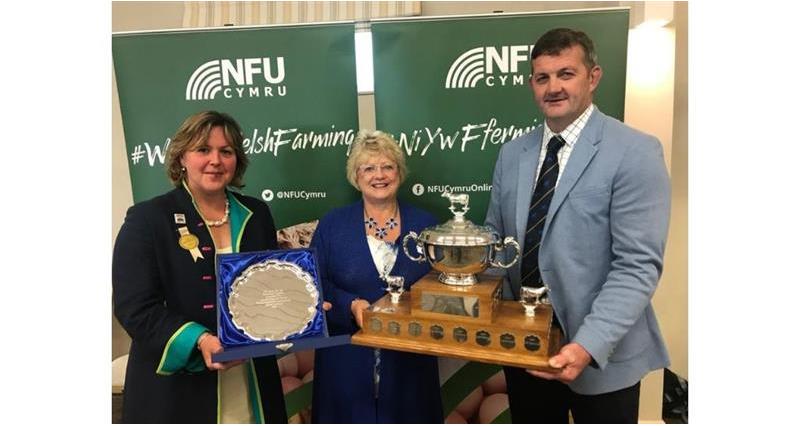 Janet Cornock has been announced as the winner of the Idris Davies Memorial Award for 2019 during a ceremony at Pembrokeshire County Show on Tuesday 13th August.

Janet has farmed at Cefnydre, Fishguard, with her late husband Gwilym Cornock since the mid-1970s after moving there from her family home at Lower House, Spittal.  Janet and Gwilym developed the Cefnydre farming business from the original 70 cow dairy herd to a herd of 320 milking cows together with followers.  The day-to-day management of the farm has been passed onto the next generation with her son, James, and his wife, Nia, now farming at Cefnydre.

During her time in Spittal and in Fishguard, she has played an active part in the club and county Young Farmers Club movement. All three of her children were active members of Fishguard YFC and for several years she was responsible for the Junior Club of 10-15 year old members.

As Secretary of Fishguard Show she carried out her duties and responsibilities with great enthusiasm, skill and effective leadership and she was responsible for organising all aspects of the Show.  Fishguard Show is a hugely important event for the North Pembrokeshire farming community, and the show has grown from strength to strength over the years, thanks in no small part to the dedication, skill and personality of Janet.  She has been a driving force to keep the success of the show going for a period of 21 years, right up until her retirement as Show Secretary in 2016.

In the last couple of years Janet has played a prominent role in helping with the organisation of various local events as Pembrokeshire took its turn to be the Feature County for the Royal Welsh Agricultural Society in 2019.  Janet provided the secretariat support for the North Pembrokeshire regional committee, and in this role she has been one of the leading lights in the fundraising efforts in the run up to this year’s Royal Welsh Show.