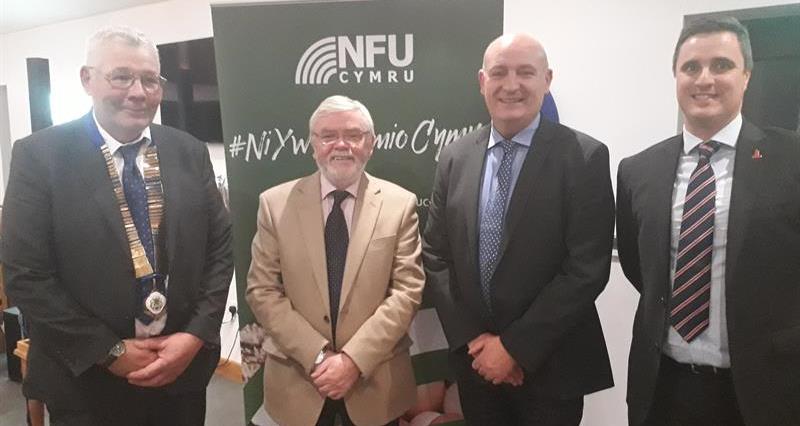 NFU Cymru in Mid Gwynedd was founded in 1919 and has steadily grown over the years. During the evening, members enjoyed a supper and capitalised on the opportunity to discuss memories of their time with the union.

Guest speaker, broadcaster, Dei Tomos, took members on a journey of the past 100 years in agriculture. He reminded the audience of many familiar names that have influenced the industry throughout this period. Mr Tomos mentioned the highlights as well as the more challenging times the industry had faced. He referred to the well-known advertisement of the Dairy Marketing Board threatening that playing football for Accrington Stanley would be the demise of anyone who wouldn't drink milk. Mr Tomos finally urged everyone to seriously consider how they could do what they do better and be able to do so more profitably.

County President, Richard Williams, shared his experiences of attending meetings at the start of his career, while County Chairman, Edwin Noble, guided everyone through the evening.

Mr Noble said: “Securing a voice for the farming industry was something that was identified by a very progressive generation at the start of the last century and the need for a strong voice for the industry remains as vital now if not more so than it was then.  As our consumers move further away from their roots of producing food, we must ensure their understanding of the needs of the farming industry to secure affordable food of quality for them.  On a personal level I am proud that I, and my father before me, have had the opportunity to serve on behalf of farmers in the county.”

During the evening, John Davies, NFU Cymru President, also outlined the main issues currently being addressed by the union, including bovine TB and the proposed Welsh Government water quality regulations.

John Davies paid tribute to Aled Jones from the county, the union’s Deputy President, for his tireless work as part of the presidential team and his ability to argue his case so scientifically with the government.