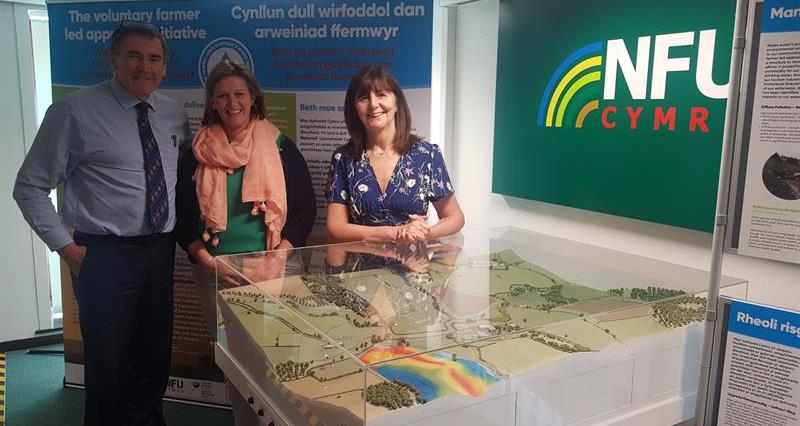 This year saw the first Water Quality seminar held in NFU Cymru’s marquee, and the line-up of speakers from Welsh Government, Natural Resources Wales, The Voluntary Farmer Led Approach to Nutrient Management and industry, gave an excellent opportunity for debate.

The session opened with Welsh Government’s Environment and Rural Affairs Director, Dr Tim Render, who expressed his thoughts on why good nutrient management is essential, protects the environment, water, biodiversity and public health of Wales, as well as the cost effectiveness and productivity of agriculture.

He outlined that Welsh Government feel increased regulation provides a clear regulatory framework and baseline standards across Wales similar to that of other parts of the UK. He felt that they need to make clear the regulatory baseline for the industry to work from and have supported this with £22 million pounds of grant funding through the SPG so far.

Lorna Davis, Project Manager of the Farmer Led Approach to Nutrient Management then outlined her work within the project which is jointly funded by NRW and NFU Cymru and involves a partnership of organisations including NFU Cymru, FUW and Welsh Water with advisory support from Welsh Government and NRW. This project aims to align with the Minister, Lesley Griffiths AM’s commitment to work with stakeholders to get the right balance of regulatory measures, voluntary initiatives and investment to improve water quality across Wales.

By taking a bottom up approach, the scheme allows farmers to collaboratively design the assurance structure, engagement methods and deliverables of the voluntary initiative, having confidence in how the regulator and government is wanting to evidence this.

Paul Williams, NFU Cymru Clwyd County Chair and beef farmer, was the final speaker of the seminar providing a very real perspective of who the project looks to engage with. Mr Williams stressed his belief that farmers are the answer to this, but need to work with a ‘science-led policy not politics-led science’. By having a single brush approach to regulation the danger is that areas such as where Mr Williams farms have very tight restrictions imposed upon them when slurry is unlikely to ever be produced.

A question and answer session from the floor followed, focusing on funding, the regulators aversion to risk and evidence of NVZ’s ability to deliver the desired water quality improvements that Welsh Government are seeking.

Mr Williams closed the session by emphasising that it is in farmers’ interests both financially and morally to address the risks of pollution if given the chance to do so.