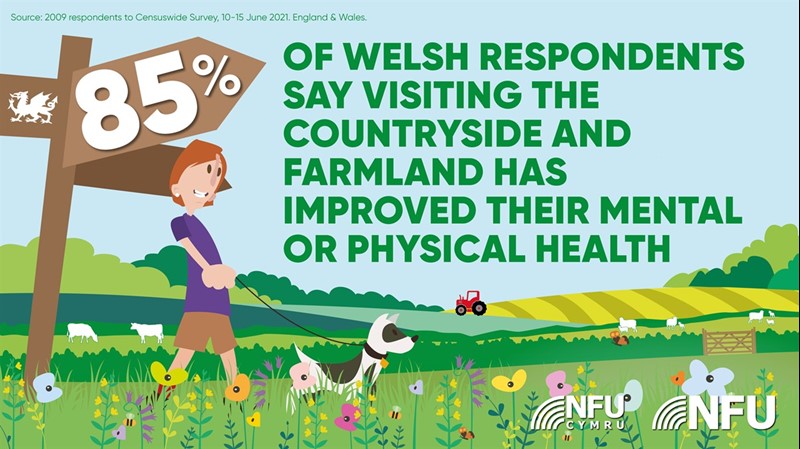 New figures released by NFU Cymru have revealed the vital role that access to the countryside and farmland played for the nation’s physical and mental wellbeing during the Coronavirus pandemic.

A survey commissioned by NFU Cymru and delivered by Censuswide, found that 85% of Welsh respondents living outside of rural areas believed their visits to the countryside and farmland since the first Coronavirus pandemic lockdown had improved their physical and/or mental health and wellbeing.

Around three in 10 (29.46%) Welsh people taking part in the survey stated that the amount of time they had spent walking, visiting or exercising in the countryside had increased since the first lockdown, on average spending more than 15 hours a month more on Wales’ hills, footpaths, woodlands and trails than they did before March 2020.

The NFU Cymru survey has also revealed people’s appreciation of Wales’ landscapes and the role that farmers play in managing the countryside had increased since the Covid-19 pandemic began. 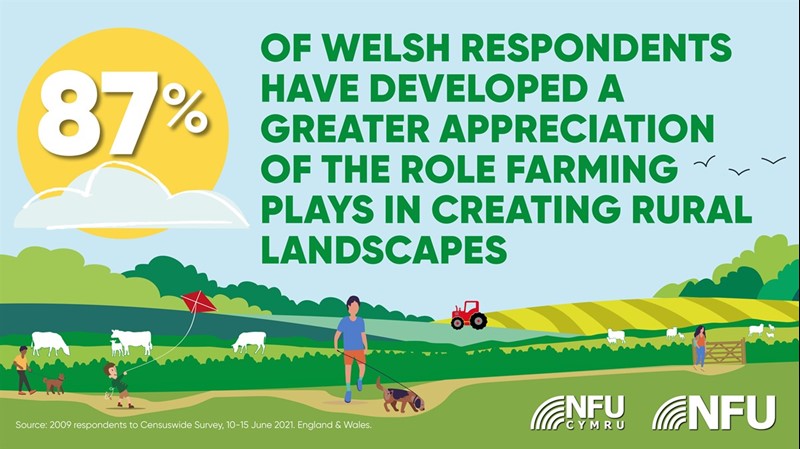 Of those polled who stated that they valued the countryside and farmland more in the past 12 months, 87% said they’d developed a greater appreciation of the role farming plays in creating rural landscapes.

“Farmers have been the custodians of the Welsh countryside and landscapes for generations and play a vital part in managing access to these areas for the public to enjoy. The nature of the Coronavirus pandemic, and in particular the first lockdown, heightened people’s desire to be out in the countryside enjoying nature and this is evidenced by the fact that such a high percentage of people spent more time outdoors than they did normally.

“It is fantastic to see from this data that people’s appreciation of the Welsh and British countryside, and the role that farmers play in maintaining and enhancing those landscapes, has increased during this time. I think it is great to see that so many people have taken such a keen interest in the industry’s work and help reinforce the farm to fork story.

“I think that Welsh farmers can be extremely proud of the role they have played in keeping the nation fed while also helping boost the nation’s physical and mental wellbeing as they enjoyed our world-renowned landscapes.”

The survey of over 2,000 adults in England and Wales explored the behaviours of those accessing Britain’s rural footpaths and farmland.

Around two in five (41%) of those questioned took a dog with them on their visits to the countryside. Of those dog owners surveyed, 73% said that they always kept their dog on a lead around livestock. Meanwhile, just under three quarters (72%) of people said that they were aware of the Countryside Code.

NFU Cymru President John Davies said: “It is clear from the data, and from speaking anecdotally to our farming members across Wales throughout the Covid-19 emergency, that people’s desire to get out into green spaces increased during the pandemic and I would like to thank the vast majority of visitors who enjoyed the countryside responsibly, kept their dog on a lead, took their rubbish home and respected infection control concerns by practising good hygiene when in and around farm holdings.”

The findings of the survey also indicated that Welsh and British tourism businesses are set to benefit from people enjoying a so-called ‘staycation’ by holidaying in the UK this year.

Of those polled who say they typically holiday abroad, over three in five (62%) stated that they would be holidaying in the UK instead this year.

NFU Cymru President John Davies added: “With many Welsh farm enterprises having diversified into the tourism sector in recent times, the news that such a large proportion of the population have indicated that they will be holidaying in the UK is a massive boost after a difficult 18 months. I very much hope that Wales’ holiday lets, bed and breakfasts, caravan parks, camping sites and hotels experience a bumper year this year to help offset some of the losses they will have incurred during that time.”