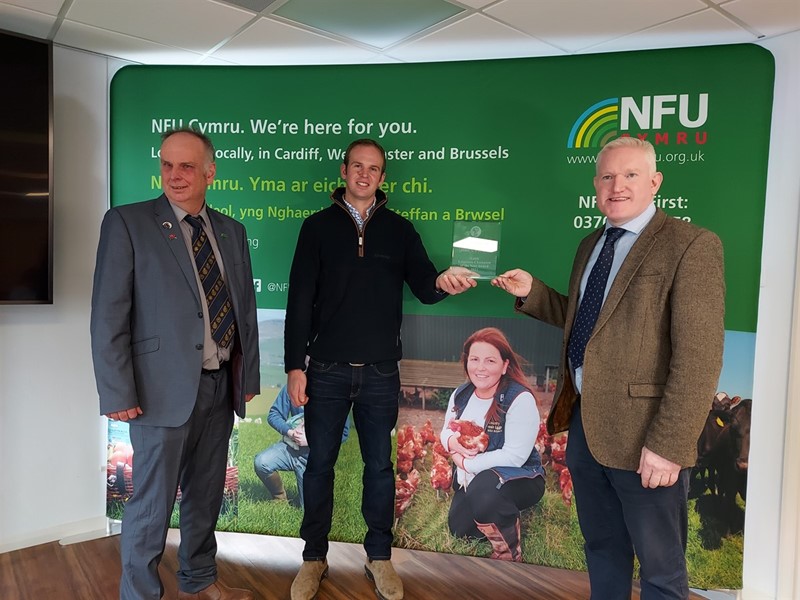 Andrew Phillips, a fourth-generation beef and sheep farmer from Pembrokeshire, has been announced as the winner of the NFU Cymru/NFU Mutual Welsh Livestock Champion of the Year Award 2021 at today’s Royal Welsh Winter Fair in Llanelwedd.

The competition, which has returned this year after being postponed in 2020 due to the Coronavirus pandemic, has been on the lookout for its seventh winner and recognises the key role a good livestock manager can make to a livestock farm and to the wider Welsh livestock industry.

Andrew, who farms with his parents at Windsor Farm, Lamphey, has always taken a keen interest in the farm from an early age, particularly in sheep production. Windsor Farm, a lowland livestock and arable farm in south Pembrokeshire, is a mixture of land owned by the Phillips family and land rented. The Phillipses have recently taken on a new 300-acres farm tenancy, which has been completely re-fenced to allow the whole farm to be paddock grazed.

Andrew attended Gelli Aur College for two years where he studied a national diploma in agriculture, for which he received a distinction, as well as being awarded student of the year. He later went on to Harper Adams University where he completed an agricultural degree.

As part of his degree Andrew wrote a report titled ‘Options to enhance profitability on a lowland farm in west Wales’, which has been used as a basis to transform the farming enterprise from a mainly potato and cattle fattening business into a predominantly sheep enterprise. The existing flock of 400 yews has been increased to 3,000, including 500 ewe lamb replacements since 2012. He mainly has Suffolk x Mules which are turned to Texel and Charollais rams to produce prime lambs sold from May to November.

As well as the sheep, Windsor Farm is home to a beef suckler herd of 40 commercial suckler cows, mainly Limousin and British Blue, which are put to a Limousin bull. Most of the calves are sold at 10-12 months of age. Artificial insemination is sometimes used to produce some potential show calves. Showing commercial cattle is a passion of Andrew’s, and the family have had success at both local and national level.

Andrew undertakes all duties for the care and management of the livestock on the farm, including all veterinary medicines and health planning work. He has been closely monitoring the health status of the sheep flock, working in association with animal health companies on product trials to regularly monitor production on a large-scale field experiment. He has also recently started using soil testing and tests grass samples to monitor trace elements, using this data to have trace element buckets tailored specifically to meet the needs of the farm, with different areas around the farm provided with the necessary elements according to need.

Development of a small flock of pure-bred Texels

Looking to the future, Andrew is looking to lower costs by breeding his own rams and has developed a small flock of pure-bred Texels to breed his own replacements. A recent venture on-farm has seen the development of the Pumpkin Patch which is a four-acre area of the farm planted with pumpkins in the run up to Halloween. Members of the public can visit the farm during this period to purchase their pumpkins and can see the sheep and beef cattle, giving Andrew the chance to engage with visitors and promote the benefits of Welsh agriculture and livestock farming.

Andrew’s aim is to continue making sure his business can remain as competitive as possible and he is always looking for ways to improve efficiency, as well as introducing technology to help progress the business.

To improve health and safety on the farm, Andrew has invested in modern sheep handling facilities and has also invested in a portable Ritchey combi clamp which helps keep ewes secure and reduces body stress on both operators and sheep. The farm has also moved away from the use of quad bikes and now uses gators; Andrew and his family believe these are safer for operators. All staff employed on the farm receive training and tests on operating farm machinery.

Presenting Andrew with the prize of £500, sponsored by NFU Mutual, and a Royal Welsh engraved crystal trophy, Chairman of NFU Cymru’s Livestock Board, Wyn Evans, said: “One of the key factors we were looking for in determining the winner of this award was the quality of the stockmanship, as this is a major factor in determining the success of any livestock business. Andrew’s stockmanship skills are of the highest calibre as can be evidenced by the excellent condition of the stock on his farm. It was clear from our judging visit to Windsor Farm that Andrew’s passion for his animals is second to none.

“We were also very impressed with the level of detail that Andrew applies to all aspects of his care and management of his animals, in conjunction with a thorough understanding of what the market and the consumer wants.”

Mike Thomas, NFU Mutual Senior Agent and NFU Cymru Group Secretary, who was part of the judging panel, said: “I would like to congratulate Andrew whose dedication and expertise as a good stockman, teamed with his commitment to farm safety, made him a very worthy winner of this award. It was a pleasure to see such fine sheep and cattle and it was also inspiring to hear Andrew’s future plans as he continually looks to improve and develop his business. NFU Mutual is pleased to recognise and champion good stockpeople who incorporate the best livestock practices with high standards of on-farm safety.”