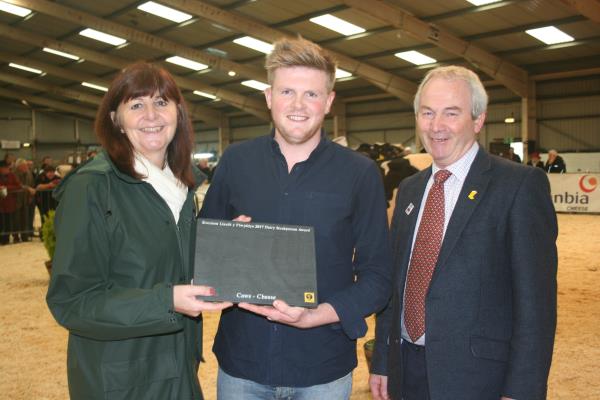 Pictured are Cabinet Secretary for Environment and Rural Affairs, Lesley Griffiths AM presenting James Evans with the Welsh Dairy Stockperson of the Year Award, along with NFU Cymru President Stephen James

James Evans of Llangedwyn, Oswestry, has been announced as the winner of the 2017 NFU Cymru / NFU Mutual Welsh Dairy Stockperson of the Year Award, during today’s Welsh Dairy Show.

The competition, now in its sixth year, recognises the important contribution a good dairy stockperson can make to a dairy enterprise, as well as the wider Welsh dairy industry.

James studied at Harper Adams University and during this time, spent 12 months on placement with HJ Lea Oakes’ feed company, gaining understanding of feed materials and rationing for dairy cows.

James later had the opportunity to implement these findings on his home farm. During his five years on the farm, he has increased the herd size from 250 to 560 head of Pedigree Holstein cows. James has developed a team of staff, formed strong relationships with key members in the industry and has taken advantage of his sister businesses (contracting and building) helping with expansion and quality contracting work.

During a presentation at the Welsh Dairy Show today [Tuesday 24 October], James was presented with the top prize of £300 and a Welsh slate engraved cheese board by Cabinet Secretary for Environment and Rural Affairs, Lesley Griffiths AM and NFU Cymru Milk Board Chairman, Aled Jones.

Speaking after the presentation, NFU Cymru Milk Board Chairman Aled Jones said: “I would like to congratulate James on winning this award it was very refreshing to see a young person implementing excellent staff training regimes and rewarding staff for best practice.”

Dai Davies OBE, Chairman of NFU Mutual’s Advisory Board in Wales, said: “This award is about highlighting the fact that Wales has some of the finest, most passionate stockpeople that you will find anywhere in the world. James’ application ticked every box that we were looking for so it’s pleasing that we’ve been able to showcase his contribution to the industry with this award.”