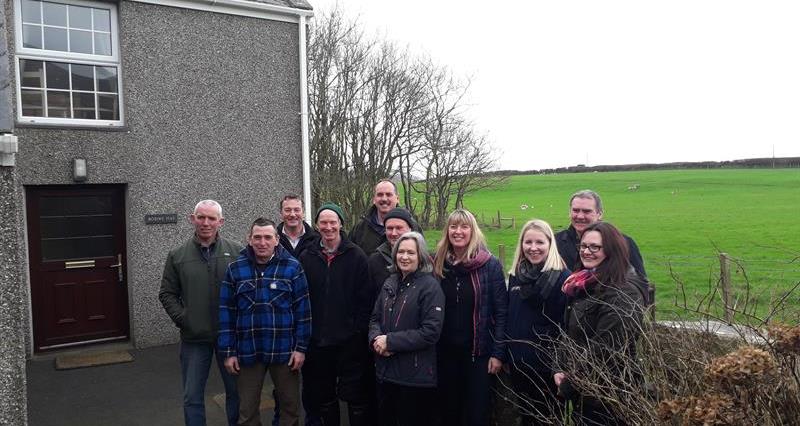 Edward Griffith, his wife Jackie and son Ellis took the opportunity to host the recently re-elected MP on the farm and to take the chance to discuss the main issues of the day.

With lambing in full swing, members had an opportunity to see the lambing facilities on farm and the first crop of lambs from the 2020 lambing season.

Discussions quickly moved on to future trade tariffs and the future support for agriculture and food policy generally.  With the Agriculture Bill working its way through Parliament, and a Trade Bill expected soon, members were keen to highlight the need for parity in terms of the support available to agriculture across all the devolved nations.  Parity of payments would ensure that Wales’ livestock farmers could continue to invest in class leading genetics and be at the forefront of livestock production. They also called for a supportive trade policy that promotes produce from Wales and protects the high standards of production and welfare that farmers uphold.

Members highlighted that whilst the reassurance from the UK Government that the existing levels of CAP funding will be transferred to Welsh Government was welcome, there was a need to ensure that the funding should reflect the true value of the original payments that existed prior to the 15% modulation that was adopted in Wales in 2014/15.

Liz Saville Roberts MP said: “Although Welsh Government will eventually decide on what the shape of any future agriculture policy will be in Wales, as a Welsh MP I have a role to play in ensuring that the Agriculture Bill that is passed at Westminster provides the best opportunities for farmers in Dwyfor Meirionnydd.”

She added: “Discussions have been valuable in understanding where our priorities are for Welsh agriculture.”

NFU Cymru Mid Gwynedd County Chairman, Edward Griffith, said: “With the adoption of the Agriculture Bill we need to ensure that there is a level playing field between all of the devolved administrations and that farmers in Wales aren’t put at a competitive disadvantage as result of what is agreed.

“Meeting with our local MP has been important, not only to communicate what we feel is important to us, but also to get an understanding of how legislation is progressing in terms of agriculture and trade.”