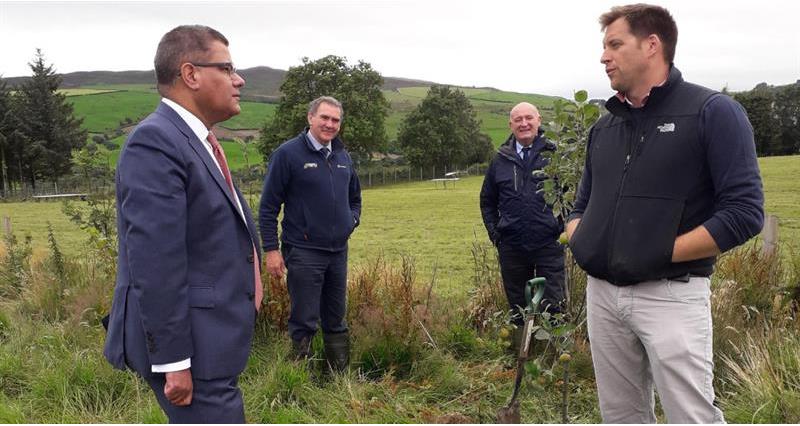 NFU Cymru has hosted a farm visit for the Secretary of State for Business, Energy and Industrial Strategy, the Rt Hon Alok Sharma MP, to demonstrate that Welsh farmers are well-placed to deliver on the industry’s net zero ambitions.

The Tuesday 4th August event saw NFU Cymru launch its new ‘Achieving net zero – Farming’s 2040 Goal’ document, which sets out that Welsh farmers are part of the solution to climate change. NFU Cymru President John Davies presented the report to the Secretary of State, who also holds the role of nominated President for COP26, as part of the on farm meeting.

The visit was hosted by NFU Cymru Next Generation Group member Llyr Jones, whose 1,600-acre sheep, beef and egg farm near Corwen also produces renewable energy to satisfy the farm’s energy needs, exporting the surplus power to the grid.  As part of his visit to Derwydd Farm, Mr Sharma  was also able to learn about the scale of work carried out on the farm as part of Welsh Government’s Glastir agri-environment scheme, including creating habitats for wildlife, tree planting, protecting some 30 acres of peatland, hedgerow management and soil and grassland management.

During his visit, the BEIS Secretary planted an apple tree as an example of the environmental work the agricultural sector carries out to sequester carbon, while also providing food and aiding biodiversity.

Speaking after the visit, NFU Cymru President John Davies said: “By focussing on improving farming’s productive efficiency; improving land management and enhancing land use to capture more carbon; and boosting renewable energy and the wider bioeconomy, Wales’ farmers will be able to play their part in addressing the issues brought about by climate change. By reducing carbon emissions in these ways farmers are in a strong position to achieve the industry’s goal of achieving net zero by 2040.

“I am thrilled that we were able to welcome the BEIS Secretary, Alok Sharma MP, on farm today to see Llyr Jones’ exciting and impressive farming enterprise, which has carbon capture and renewable energy at its heart. Llyr’s farm is just one of a wide network of farms across Wales who are harnessing innovation to reduce emissions and produce climate friendly food. These businesses are net zero leaders not just in the respect of farming, but in a wider business context.”

Alok Sharma, COP26 President and Secretary of State for Business, Energy and Industrial Strategy said: “I was very pleased to visit Llyr Jones’ farm and see first hand the actions being taken to mitigate climate change and support nature on their land.

“I welcome the NFU’s ambitious commitment to reach net zero by 2040, and I look forward to working across governments, business and civil society in the run up to COP26 to raise global commitments to reduce carbon emissions."

NFU Cymru Next Generation Group member Llyr Jones added: “I take great pride in the work we do to maintain and enhance the environment, encourage biodiversity and support the local community alongside my core role as a food producer. I was pleased to be able welcome the Secretary of State on farm today to show him how we’re always striving to positively influence the carbon impact of our business. I hope Mr Sharma enjoyed his visit to my north Wales hill farm and that what he has seen shows him that our industry has a vital role to play in the climate change challenge now and in the future.”