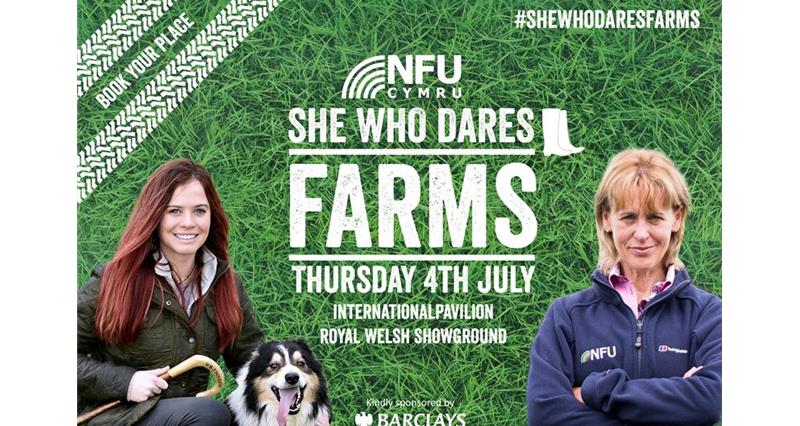 Two prominent farming icons will be joining NFU Cymru for its inaugural conference, entitled She Who Dares…Farms, aimed at showcasing the contribution women make to the farming industry.

NFU President, Minette Batters along with shepherdess and runner up of prime time TV show, SAS: Who Dares Wins, Hannah Jackson, will be key note speakers at the conference, to be held at the International Pavilion, Royal Welsh Showground on Thursday, 4 July.

NFU Cymru County Adviser for Monmouthshire, Brecon and Radnor, Stella Owen said: “The title of our conference - She Who Dares…Farms - encapsulates women in farming, they are forging their way and breaking the mould in what has historically been viewed as a very male-dominated industry. The aim of this conference is to bring women involved with farming businesses, together to share knowledge, ideas and most of all to raise the profile of women who can become more involved with the union and the industry as a whole. We are already fortunate to have a wealth of resource with female group secretaries, county chairs and commodity board delegates.

"Over the years times have changed and women are not only running farms but often work off farm or have separate diversification enterprises all whilst juggling childcare, family and farm life, and we want to showcase this."

NFU Cymru is looking forward to welcoming farmers from different sectors and across all areas of Wales. Thank you to Barclays Bank for their kind sponsorship of the event.

Spaces are limited so please register your attendance by contacting the NFU Cymru office on 01982 554200 or email bmZ1LmN5bXJ1QG5mdS5vcmcudWs=.

Minette runs a tenanted family farm in Wiltshire. The mixed farming business includes a 100 cow continental cross suckler herd, and a small herd of pedigree Herefords as well as sheep and arable. Diversification includes the conversion of a 17th Century tithe barn into a wedding and corporate events venue, and horse liveries. Minette co-founded the campaigning initiatives 'Ladies in Beef' and the 'Great British Beef Week'.

She has been an NFU member from grassroots through to County Chairman; she served as Wiltshire’s Council delegate and also as Regional Board Chairman for the South West. Minette has also been a member of NFU Governance Board and served as NFU deputy president for four years from 2014 to 2018. Minette is also a Trustee of Farm Africa.

Lesley Griffiths was brought up in North East Wales and has lived and worked in Wrexham all her adult life. She has 2 daughters and has served as a school governor and community councillor. She worked at the Wrexham Maelor Hospital for 20 years. Prior to her election she worked as constituency assistant to Ian Lucas, MP. As a strong supporter of devolution for Wales, she played an active role in the 1997 'Yes for Wales' campaign. She is a member of Unison.

Outside of politics, her main hobbies are music, walking and watching Wrexham Football Club. Lesley is formerly an elected director of the Wrexham Supporters Trust.

In 2019 adventure loving Hannah completed the selection process for SAS-Who-Dares Wins. Surviving in arctic conditions in the Chilean Andes, Hannah was the first intake which included female recruits and was one of the only 2 females to complete the course. She thrives on the extreme challenges and the ability to test both her physical and mental resilience and strength.

After completing her degree in animal behaviour and set to study a master’s degree in marine biology, Hannah has a chance encounter with a new born lamb. An encounter that resulted in a change of career and saw Hannah swap city life for the rural hills of Cumbria. As a ‘female redheaded townie’, she entered a very traditional and male dominated world and in the last 5 years, she not only carved a career in farming but has established her successful brand of @Redshepherdess.

Hannah has earned the respect of the farming industry. In 2018 she was a finalist for the national Young Farmer of the Year. She is an active ambassador for the farming industry and is currently on the national judging panel for the NFU Farmvention Programme, aimed at supporting schools to engage with how food is produced. She is an ambassador for the National Sheep Association and is a regular speaker at conferences and events – sharing her perspective as a new entrant and young farmer. She is active on all forms of social media with tens of thousands of followers.

Hannah’s love of wildlife has seen her complete a number of projects including contributing to a Killer Whale research project for Orca Lab, where she lived for weeks on a cliff in British Columbia in a tent with no running water or electricity whilst observing the impact of tourism on whale’s behaviour.

Hannah thrives on challenge’s and pushing herself to her limits. Therefore, she is keen to inspire and be an example to more young people to show that it is possible to achieve your dreams and ambitions with hard work, determination and commitment.

Hannah is regularly featured on TV and radio, both sharing her story and contributing to thought leadership pieces.

Hannah is an avid Cross fitter. She competes in team-based competitions such as Tribal Clash Portugal. She loves to swim, climb, kayak and paddle board.