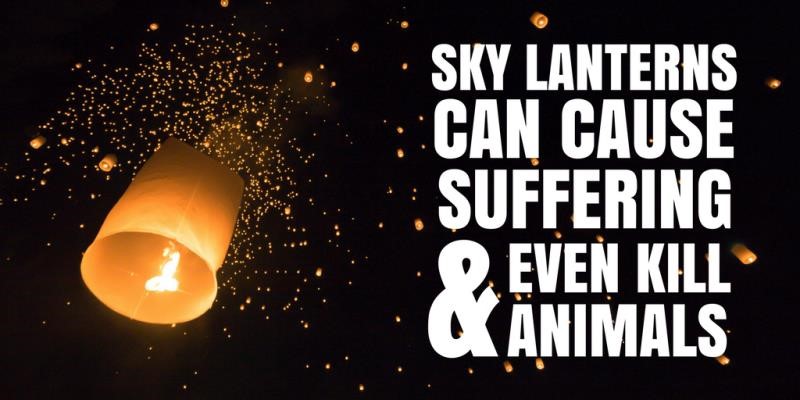 ‘The UK Government should act now and make the use of sky lanterns illegal’ - that’s the message from NFU Cymru as part of a coalition of farming, environment, animal and fire organisations.

The group, made up of 18 organisations, has written to UK Environment Minister Rebecca Pow to explain how the UK Government’s approach not to regulate sky lanterns is now significantly out of date and out of line with other countries where the release of sky lanterns is considered an environmental crime due to the harm they cause animals, habitats and the countryside.

By enacting Section 140 of the Environmental Protection Act 1990 the Secretary of State can prohibit or restrict the importation, use, supply or storage of injurious substances or articles, such as sky lanterns. 152 local councils – including all 22 local authorities in Wales - have already banned the release of sky lanterns on council property, but with no national legislation the countryside and our farms remain unprotected.

“The dangers of sky lanterns have been recognised by countries across the world and it’s high time we joined this growing global community and implement a ban on them here in the UK.

“It is great that all of our Welsh local authorities have already showed the leadership to ban the release of sky lanterns from council-owned land and property here in Wales. We are now calling on UK Government to take this important, logical next step to ban the unnecessary risk posed by sky lanterns and protect property, animals and farmland, ensuring a safer, cleaner and greener rural Britain.”

“Sky lanterns are a blight on the countryside and incredibly dangerous. Once released, there is no way of knowing where they will end up and all too often they end up strewn over fields, causing a major hazard for grazing livestock, not to mention the fire hazard risk they pose. It is high time their use was ended swiftly.”

Who signed the letter?

David Bowles, Head of Campaigns and Public Affairs at the Royal Society for the Prevention of Cruelty to Animals (RSPCA)

Ellie Brodie, Head of Land Management at The Wildlife Trust

Eoghan Cameron, Chairman of The British Association for Shooting and Conservation (BASC)

"NFCC fully supports a ban. Sky lanterns have been proven to start wildfires and property fires, kill or injure livestock, as well as polluting our natural environment. They put unnecessary strain on our critical services. Our advice is simple - don’t use them."

“Although beautiful and often used for sentimental or celebratory purposes, the truth is that what goes up must come down and sky lanterns inevitably become litter. We believe that asking the government to ban sky lanterns will awaken everyone to this fact.”

"Though sky lanterns might look pretty in the sky, they pose a serious danger to horses, farm animals and wildlife.

“Sadly, many people are unaware of the potentially deadly consequences the release of sky lanterns can have for animals. Not only are they a serious fire hazard, but the RSPCA has had reports of suffering animals through ingestion, entanglement and entrapment, or simply the sight of a lit lantern in the sky causing terrified animals to bolt and harm themselves.

"We know many people are already aware of the dangers sky lanterns pose to animals and we are pleased to work in coalition with the National Farmers’ Union and others to raise awareness within the UK Government of our concerns.”