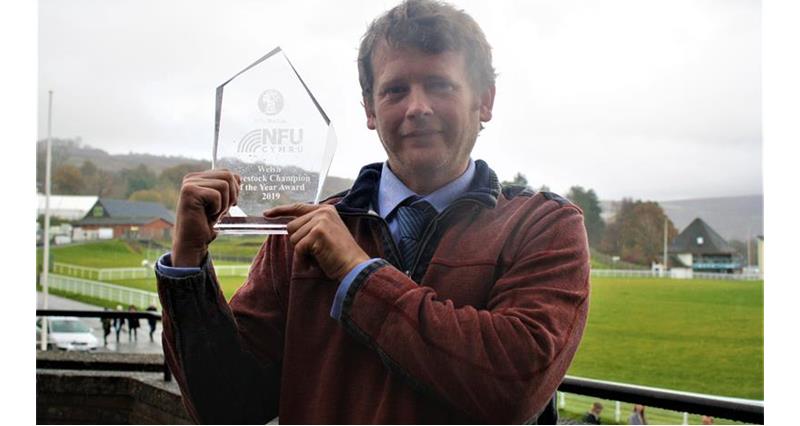 Gary Howells, a beef and sheep farmer from Shadog, near Llandysul, has been announced as the winner of the NFU Cymru/NFU Mutual Welsh Livestock Champion of the Year Award 2019 at today’s Royal Welsh Winter Fair in Llanelwedd.

The competition, now in its sixth year, recognises the key role a good livestock manager can make to a livestock farm and to the Welsh livestock industry as a whole.

Gary, who farms around 450 acres alongside his wife Meinir in Pentrecwrt, Llandysul has always been a keen farmer. From the age of 16, Gary took an interest in sheep scanning and completed a course enabling him to scan his own pedigree flock of Texel ewes. He grew his business which is now in its 24th year.

Gary, who has two young children, Sioned, aged three and Dafydd, 19 months, farms around 600 sheep and 100 ewe lambs. He sells between 150 and 200 yearling rams each year and also keeps just shy of 200 head of cattle.

Along with wife Meinir, Gary sells 95% of the lambs for breeding, the couple keep Pedigree Texel ewes, suffolks, balwens, charolais, beltex and blueface. They also have a small flock of commercial ewes. The yearling rams are sold through a number of channels including the NSA Ram Sale, Welshpool tup sale and on social media. 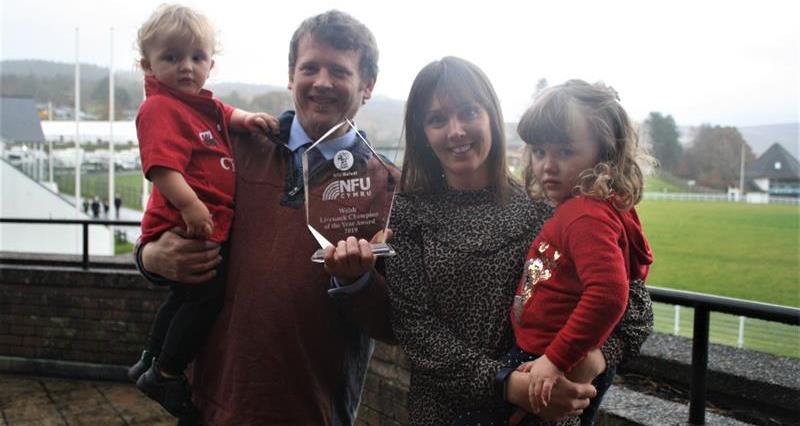 His Texel flock is one of the oldest flocks in the UK and Gary’s focus is to produce rams for his customers’ future profits, not just for the show ring.

Gary keeps around 50 sucklers, which are mostly limousine x blue, and a herd of pedigree lims. He also keeps 40 heifers, which are bulled each year to sell as cows and calves in May. Currently he has 30 heifers which are ready to be bulled now.

Over the last five years, Gary and Meinir have made improvements to the facilities at Shadog, including a new slurry store, two new sheds and concreted yards to ensure that the stock have the best chance to reach their full potential at sales.

Gary places an emphasis on breeding what the customer is looking for and believes this is essential to the future proofing of his business. He aims to increase the value and profit of each animal produced. He also continues scanning to supplement the business and usually scans around 70,000 sheep, and some cows, annually.

Health and safety is a big part of Gary’s business. New handling facilities have been installed, including a new race and crushes with a superscoop, which has made TB testing, clipping and injection much easier for him.

Presenting Gary with the prize of £500, sponsored by NFU Mutual, and a Royal Welsh engraved crystal trophy, Chairman of NFU Cymru’s Livestock Board, Wyn Evans, said: “One of the key factors we were looking for in determining the winner of this award was the quality of the stockmanship, as this is a major factor in determining the success of any livestock business. Gary’s stockmanship skills are of the highest calibre as can be evidenced by the quality of the stock on farm, and his passion for his animals is second to none.

“We were very impressed with Gary’s passion and commitment for looking after his stock and he also demonstrated that he was continually looking to improve and develop his business.” 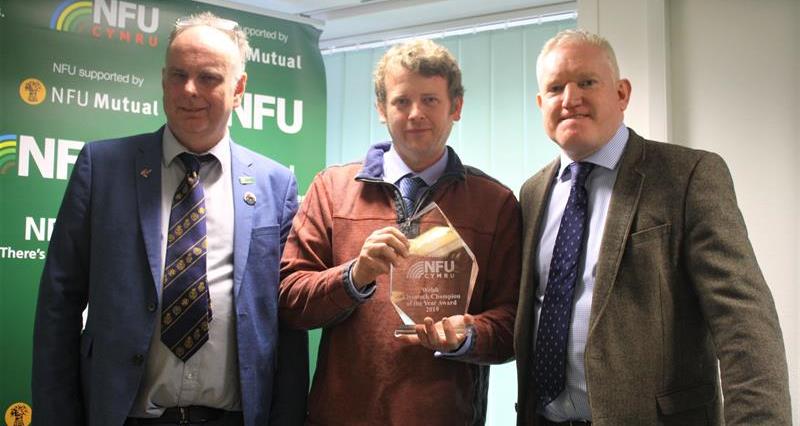 Mike Thomas, NFU Mutual Senior Agent and NFU Cymru Group Secretary, who was part of the judging panel, said: “I would like to congratulate Gary whose dedication and expertise as a good stock person, teamed with his commitment to safety, made him a very worthy winner of this award. NFU Mutual is pleased to recognise and champion good stock people who incorporate the best livestock practices with high standards of on-farm safety.”