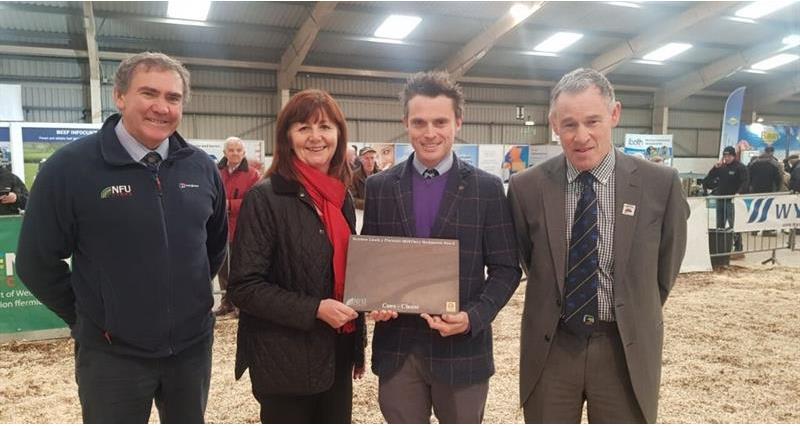 Rheinallt Harries, from Bethlehem in Carmarthen, has been announced as the winner of the 2019 NFU Cymru / NFU Mutual Welsh Dairy Stockperson of the Year Award at today’s Welsh Dairy Show.

The competition, now in its eighth year, recognises the important contribution a good dairy stockperson can make to a dairy enterprise, as well as the wider Welsh dairy industry.

During a presentation at the Welsh Dairy Show today (Tuesday 29th October), Rheinallt was presented with the top prize of £500 and a Welsh slate engraved cheese board by Minister for Environment, Energy and Rural Affairs, Lesley Griffiths AM, NFU Cymru Milk Board Chairman, Gareth Richards and Group Secretary Rob Thomas, who judged on behalf of  NFU Mutual.

Rheinallt first experienced dairy farming when he worked on a mixed dairy and beef farm after leaving university. While there he was involved in all general husbandry duties of the dairy enterprise.

From here, Rheinallt and a friend secured a tenancy on a dairy farm which allowed them to get a foot hold in the industry, and within five years had 200 cows and followers. In 2017, Rheinallt and his wife, Rachel, became tenants on a dairy farm where they now farm with their young family. They currently have 160 spring calving cows, 40 in-calf heifers, 55 spring-born calves and four bulls.

They are a spring calving herd that utilises as much grass as possible with the main management focus around fertility and breeding, as well as the grazing management. Rheinallt also focusses on pre and post-calving health to maintain a tight block calving pattern. They ensure all cows are cycling three weeks prior to start of service. In 2019 they calved 50% of the herd in the first two weeks of calving and achieved 90% in six weeks.

Rheinallt follows a strict vaccination programme to ensure all animals are as healthy as possible.

When it comes to grazing management, Rheinallt measures the grass weekly which allows them to maximise grass intakes. Fortnightly grass samples are also taken to monitor grass quality throughout the season.

Rheinallt also pays particular attention to young stock management, ensuring they are able to grow the business through their own stock. All cows’ colostrum levels are measured with a refractometer which allows him to give the best colostrum to the heifer calves. Managed in a similar way to the main herd, they are rotationally grazed, ensuring they have the best possible grass. Growth rates are measured and monitored to ensure they achieve target weight for calving at 24 months.

Speaking after the presentation, NFU Cymru Milk Board Chairman, Gareth Richards said: “I would like to offer my congratulations to Rheinallt on winning this award. While the standard of entries in this year’s competition was particularly high, Rheinallt’s passion for his work, his determination to drive his business forward, along with his willingness to listen to his peers and explore different methods and ways of working, meant that he really stood out during the judging process. He joins some illustrious company in being awarded the Welsh Dairy Stockperson of the Year title and his win is thoroughly deserved.”

Robert Thomas, NFU Cymru/NFU Mutual Group Secretary, added: “Once again it has been a privilege to be a part of the judging process for this fantastic competition. The standard of entries this year has highlighted the high calibre of the people we have working in the Welsh dairy sector. Rheinallt demonstrated a real eye for detail and it was clear to us that he operates his business with the consumer in mind. He is a fine example of a young man who takes great pride in his work, his system and his cows.”