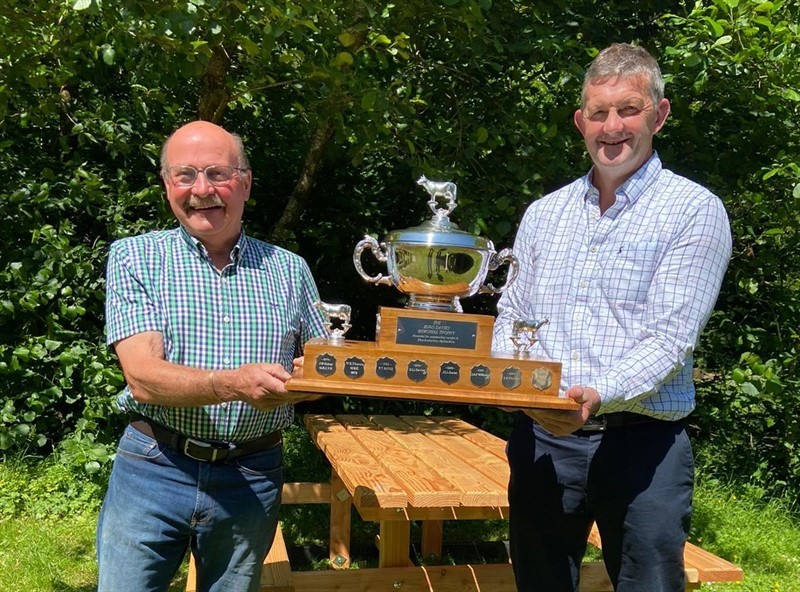 Well-known Pembrokeshire dairy farmer and founder of the Daioni Organic milk business, Laurence Harris, of Ffosyficer Farm, Abercych, was announced as the winner of the Idris Davies Memorial Trust Award for 2020 and has now been presented with his award.

Laurence began his farming career in 1970 when he took over the running of the family farm after graduating from the Royal Agricultural College and has grown the farming business from 150 acres to over 3,500 acres today. The business operates three dairy herds totalling over 1,000 milking cows as well as a sheep flock of 1,200 breeding ewes, a small pedigree Hereford suckler herd and a large arable farming enterprise.

Over 20 years ago he and his son Tom, who had returned home to farm, made the decision to convert to organic farming. The business is now an example of a successful organic farming enterprise and one of the largest organic farming businesses in Wales.

This was initially supplied to local schools before quickly becoming available through the Welsh regional supermarkets and convenience stores. Since 2013 Daioni Organic milk products have also been exported into global markets. Their Organic long-life milk was the first British dairy product to be certified for sale in China.

Daioni milk products can now be found extensively throughout the Middle East, Asia and the Pacific region with a sales and marketing office now in Hong Kong.

Laurence is a proud ambassador for Welsh agriculture and is a great example of Welsh rural entrepreneurship at its best. He is a substantial employer in North Pembrokeshire, and agricultural students are regularly given work placement opportunities at Ffosyficer where the Harris family help them to develop their skills and careers. He is an active member and past Chairman of the Grasshoppers discussion group, and his exceptional contribution to the Welsh dairy industry was recognised at the 2017 Royal Welsh Show when he received the prestigious Sir Bryner Jones Award.

He continues to contribute to his local community as a former player and past Chairman for both the rugby club and cricket club in Cardigan. More recently, he is an active committee member, player and umpire at the thriving Llechryd Cricket Club where he is also immediate past Chairman. He is currently a member of the Wales Over 70s cricket squad and plays regularly in the national league.

Both the farming business and Daioni Organic continue to sponsor many local sports teams and local charities. Laurence was a member of Cardigan Round Table for 15 years and became its Chairman and President, and he was actively involved in raising large sums of money which were distributed to local charities and worthy causes.