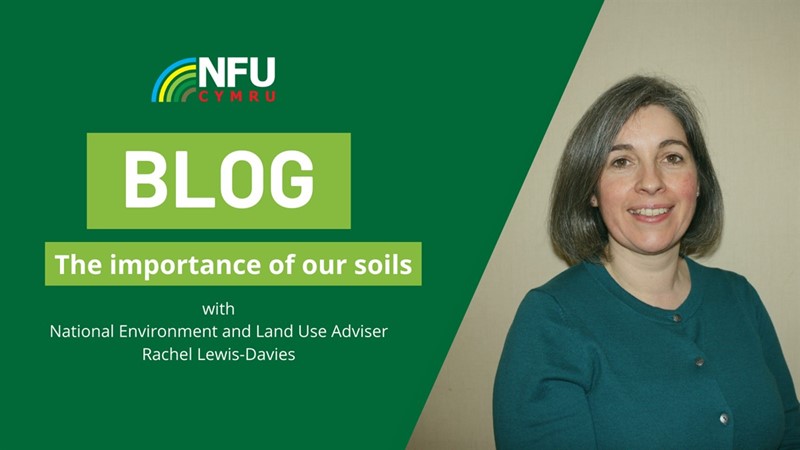 Following the publication of a Welsh Government report by ADAS, NFU Cymru's National Environment and Land Use Adviser Rachel Lewis-Davies, discusses the detail of the report and its findings, and what this means for Welsh farming and our important soils.

Want to learn more about World Soil Day (5 December) and how you can get involved? Click here

Many of us will be familiar with the alarmist headlines such as “100 harvests left” and “treating our soil like dirt” which have brought issues surrounding soil management and protection to public attention.

Welsh Government has recently published a report under their Soil Policy Evidence Programme which aims to understand and prioritise specific threats to soil in Wales.  The report, by ADAS, is very useful in providing some perspective and highlights that the alarmist headlines refer to specific risks, for specific soils, in specific areas.  The report emphasises that many soils in Wales remain in good condition.

That is not to say that threats to soil in Wales do not exist.  Key threats include compaction, erosion, loss of Soil Organic Matter (SOM), soil contamination as well as the loss of soils to development.  The distribution of threats varies across the country.  It is also not clear how soils are responding to climate change with much debate over whether measured declines in UK soil carbon are related to climate change or other factors such as land management or recovery from acidification.

The report identifies, in comparison, arable soils are more vulnerable to a range of threats caused by cultivation practices that may compact soils, influence soil erosion and lead to reductions in organic matter.  On intensively managed grassland soils, the main threat is damage by heavy machinery and poor management of grazing livestock.  The extensively grazed soils that predominate in Wales are generally at low risk of soil degradation and typically have low rates of soil erosion and compaction, coupled with high organic matter content and consequently high carbon storage.

Overall, the report concludes most soils in Wales are at low risk of degradation under current agricultural management which is dominated by permanent pasture.

The report identifies that it is important to reward farming systems that both maintain and build Soil Organic Matter (SOM) and improve long-term soil health.  SOM accumulation is favoured by management systems which add high amounts of biomass to soils, improve soil structure, enhance species diversity and minimise soil disturbance.

The research is potentially useful in informing Welsh Government’s proposed Sustainable Farming Scheme which will replace the CAP and see farmers rewarded on the delivery of actions that deliver environmental outcomes.

A note of caution – a key challenge identified in the report will be the establishment of a baseline and target value for soil properties.  Whilst measuring SOM is easy and relatively cheap, multiple samples will be needed per field to adequately represent spatial variability.  Linking payments to changes to actual SOM levels is also difficult and would require a policy that acknowledged differences in farming systems and soil types to set baseline levels and reward maintaining or increasing SOM. It is also important to recognise that increases in SOM as a result of a change in land management are finite and will stabilise as a new equilibrium is reached.