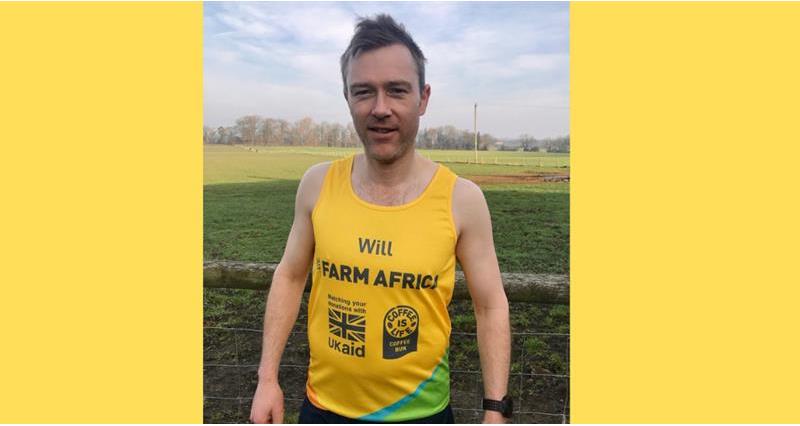 A member of NFU Cymru’s Next Generation Group is set to run the London Marathon to raise funds for the international development charity Farm Africa.

Will Evans, a farmer from Bangor on Dee, near Wrexham who runs the popular Rock & Roll Farming podcast, will take on the 26.2 mile run on Sunday 28th April with the aim of raising £5,000 for Farm Africa’s Coffee is Life appeal to help farmers in eastern Africa run profitable businesses. Will will be running the marathon alongside an NFU team of five current and former officeholder and staff: NFU President Minette Batters, Vice President Stuart Roberts, Adam Bedford, Martin Rogers and Jim McKeane.

Coffee is Uganda’s most valuable crop, yet coffee farmers are struggling to get by as they lack the tools, training and bargaining power needed to grow enough coffee and sell it for a fair price. Women suffer the most as they provide the bulk of the low paid, unskilled labour, while men own the land and make most of the profit. Women typically earn 38% less than men.

The Farm Africa project in Kanungu will help female farmers gain access to the land they need to grow coffee on, set up savings associations so they have access to finance to invest in developing their businesses, and support to take on leadership roles within their local coffee cooperatives. A gift of £11 could train one farmer to produce high-quality coffee.

Will Evans has been doing most of his training in the winter months on the country lanes around his family’s farm, often at night with a headtorch on. He said: “One of the best things about being part of the farming community is that no matter where you are in the world, you have something in common with other farmers there, and can appreciate their struggles and challenges. When I started looking into the work that Farm Africa are doing to reduce poverty and drastically improve the lives of farmers and their families in East Africa, I knew that I wanted to get involved. If the money I raise by running the London Marathon can help, even in a small way, then all the training and hard work will have been 100% worth it.”

In answer to what he was most looking forward to about the Marathon, Will quipped: “The cheeseburger and beer that I’ve promised myself when I’ve finished. The sense of achievement will be pretty cool too, but it’s all about the burger really.

“My wife and four young daughters are all coming in T-Shirts they’re making with ‘Go Daddy’ on them. I’ll probably cry when I see them during the race,” he added.

Minette Batters, President of the NFU said: “Running for Farm Africa is about running for a reason; I’ve seen some of the truly amazing work that Farm Africa do and it deserves our support. I think Farm Africa is an outstanding charity. It’s not about money, it’s about transforming lives, because you give farmers the tools to build a business. And that’s why it means so much to us because it’s tangible as you can see the difference it makes to people who are leading incomparable lives to our farming existence.”

Stuart Roberts, Vice President of the NFU, added: “There’s lots of worthy charities to support, but I’m a big supporter of Farm Africa because they enable people to develop businesses, to learn new skills, so they can support themselves and their local communities.”

International Development Secretary Penny Mordaunt said: “The Coffee is Life appeal will empower women across Uganda to build their own farming businesses.

“UK aid and Farm Africa are working together to give these women the training and skills they need to lift themselves and their families out of poverty.

“Through UK Aid Match the government will double all public donations to the appeal.”