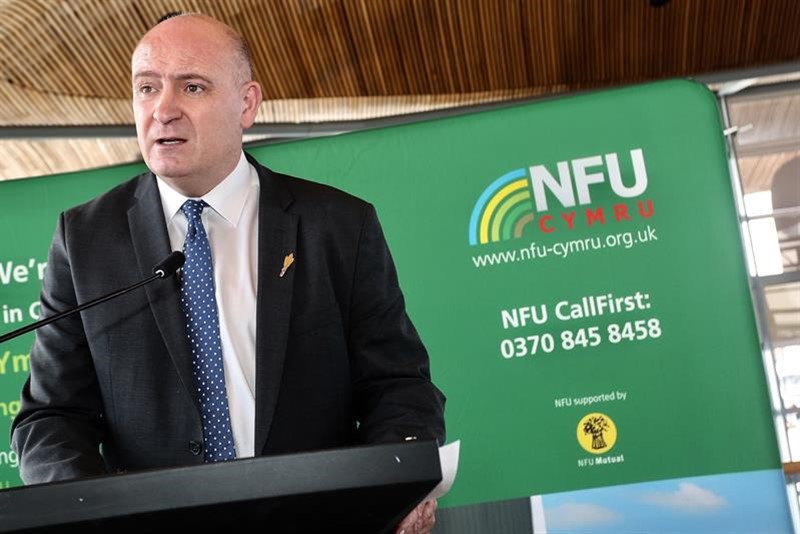 NFU Cymru has written to the Welsh Government Deputy Minister for Climate Change, Lee Waters MS, after he suggested that people should eat less meat in a bid to tackle climate change.

Speaking to BBC Wales Political journalist James Williams on the Politics Wales programme on Sunday 7th November, Mr Waters said that ‘according to the science’ consumers should reduce their meat consumption but prioritise local, better quality meat on the occasions when they do eat meat. The comments mirror Welsh Government’s Net Zero Wales Plan – Carbon Budget 2.

Devising a path to net zero

In his letter to Mr Waters, NFU Cymru President John Davies maintained that the high sustainability values of Welsh red meat and dairy mean that consumers can continue to enjoy these products knowing that they are not impacting the environment.

Outlining NFU Cymru’s Net Zero 2040 ambition, Mr Davies also encouraged Welsh Government to devise its path to achieving net zero in Wales and not to follow the route being advised by the UK Climate Change Committee.

In his letter, Mr Davies said: “NFU Cymru is firmly of the view that consumers can continue to maintain current average levels of meat consumption provided they carefully consider the provenance and production methods associated with that meat. We welcome the comments you made in your interview with James Williams that ‘the meat you do eat should be local meat and it should be better quality meat’. As producers of some the most climate-friendly food in the world, this is a point with which we agree entirely. Consumers can purchase meat from Wales safe in the knowledge that it is produced to some of the highest standards of sustainability.

“I am sure you are also aware of the NFU Cymru/NFU Net Zero 2040 ambition for agriculture and the steps we have outlined to achieve Net Zero, based on our thee pillars of improving productivity, increasing carbon storage and boosting renewable energy generation and the wider bioeconomy. It is for this reason that we firmly believe that farmers hold the key to helping Wales tackle the effects of climate change; our industry needs to be viewed as a crucial part of the solution, rather than the problem. We believe that our vision for Net Zero is more practical and achievable than some of the proposals set out in the CCC advice.

“The message that reducing meat consumption helps the environment is far too simplistic. A different pathway than advised by the CCC is needed. I hope that based on the role that agriculture plays to the geography, economy and culture of Wales, alongside the ambition that the agricultural industry in Wales has set for itself, including the NFU Cymru Net Zero vision and HCC’s The Welsh Way, that you will agree that there is an alternative and more just transition to Net Zero that has been developed by the industry.”