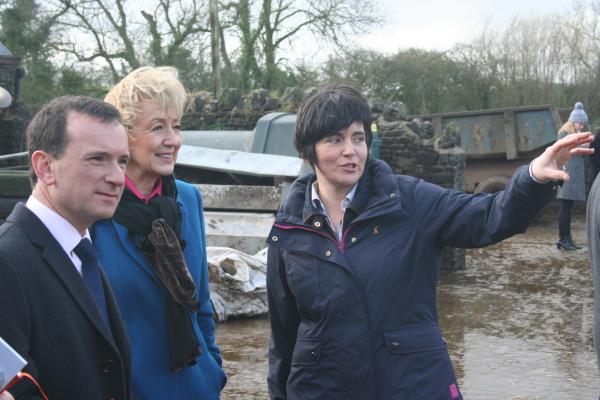 Secretary of State for Environment, Food and Rural Affairs, Andrea Leadsom MP, has met with local NFU Cymru members on farm in Wenvoe, near Cardiff, to discuss issues facing the Welsh agricultural industry.

Ms Leadsom was joined by Secretary of State for Wales, Alun Cairns MP, for the visit to Abi Reader’s Goldsland Farm to see first-hand the vital role that farming plays for food security, the economy, local communities and the environment.

The visit to Goldsland Farm was followed by two meetings in Cardiff Bay. The first, led by Alun Cairns MP and the Welsh Office, was attended by NFU Cymru officeholders and staff, while the second round table meeting, organised by Welsh Government and headed by Lesley Griffiths AM, Cabinet Secretary for Environment and Rural Affairs, was attended by NFU Cymru President Stephen James.

NFU Cymru President Stephen James said: “I’m pleased that we were able to meet with Andrea Leadsom MP on farm this morning and later in Cardiff Bay to talk to her about the major issues affecting our industry.

“The visit and subsequent meetings, which were extremely positive and constructive, gave us the opportunity to impress upon Ms Leadsom the importance of trade and export markets, particularly as 90% of our food and drink exports and over a third of our lamb crop is exported to the EU. Losing access to those markets, even if it was for a short period, or being hindered by tariffs or non-tariff barriers would be extremely damaging to Wales.

“We also spoke about future support and the need for parity with our counterparts across the UK and the EU. The CAP is worth around £370 million per year to Wales, but I would strongly suggest this represents exceptional value for money when you think about the contribution agriculture makes to the wider Welsh economy, the environment and tourism industry.

“Another key part of the discussion was over the subject of labour and access to a reliable workforce. Wales’ farms do utilise EU labour and the processing sector in Wales is heavily reliant on workers from across Europe. We made it clear that we expect the Prime Minister to deliver on the acknowledgement in her January statement of the vital role a reliable workforce plays for a variety of sectors.

“As the process of leaving the European Union moves forwards it is clear that all parties will have to communicate with one another to ensure the best outcome for the UK, and indeed the Welsh, agricultural industry, so it’s vital that NFU Cymru is able to continue to liaise with those in a position of influence in Cardiff Bay, Westminster and Brussels at this pivotal time.”