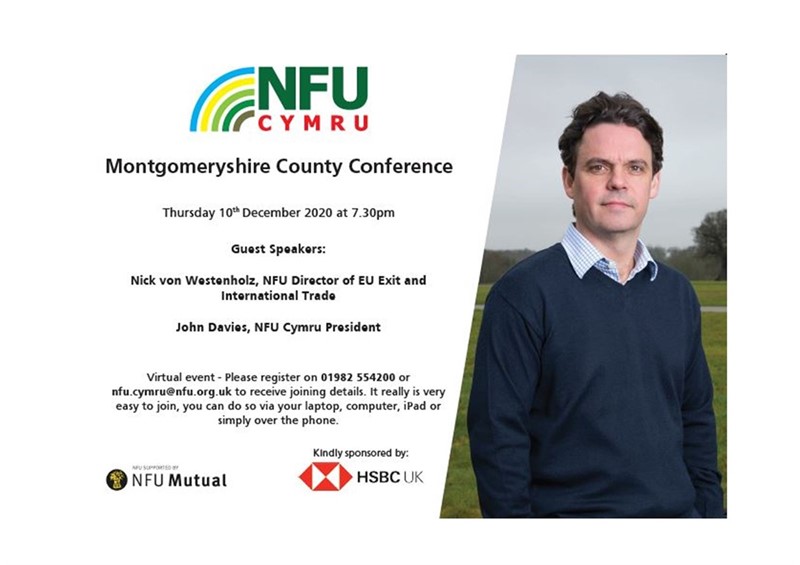 Held virtually via Microsoft Teams on Thursday 10th December at 7.30pm, Nick will be joined by NFU Cymru President John Davies who will give an update on the work NFU Cymru is currently undertaking.

Before joining the NFU, Nick served as Chief Executive of the Crop Protection Association (CPA). He has enjoyed a varied career both within and outside agriculture. Prior to working at the CPA, Nick was Head of Government Affairs at the NFU and worked for a London-based public affairs agency for many years. He is also a trained lawyer, being called to the Bar in 2007. Nick lives with his wife and two children on the family’s arable farm in East Hertfordshire, which is managed in partnership with two neighbouring farm businesses.

NFU Cymru County Chair for Montgomeryshire, Hugh Besent, said: “I’d like to thank Nick for agreeing to join us this year, albeit virtually. It has been a strange year and so coming together for our annual conference is even more important than usual.

“I hope Nick can enlighten us more on future trade deals with the European Union and around the world. It’s even easier this year and you can do it from the comfort of your own home.

“All members who join our virtual County Conference will be entered into our prize to win £50 shopping vouchers.”

All members in Montgomeryshire will receive joining instructions for the meeting via email but for more information and to register your place please contact the NFU Cymru office on 01982 554200.

NFU Cymru would like to thank HSBC UK for sponsoring all 11 virtual county conferences.