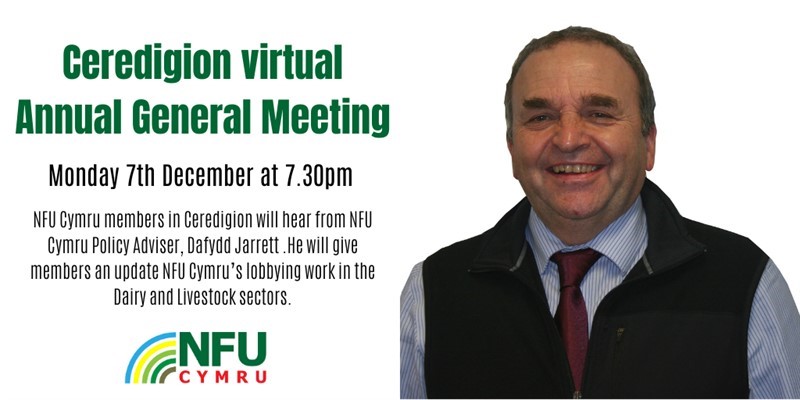 The meeting, which will be held virtually via Microsoft Teams, will take place on Monday 7th December at 7.30pm.

Dafydd Jarett, who is based at NFU Cymru HQ, has been NFU Cymru’s Policy Adviser with responsibilities for livestock, dairy, poultry and animal health issues since January 2017. He is also the secretary for both the NFU Cymru dairy and livestock boards.

Dafydd has been part of the NFU Cymru team since 1997, previously as a Policy Adviser for Anglesey, Mid Gwynedd and Meirionnydd. He was awarded a Fellow of the Royal Agricultural Society for his work over the years with agri-environment in Wales. Prior to working for NFU Cymru Dafydd was employed with ADAS as a dairy, livestock and farm management adviser, and he worked on the inaugural Tir Cymen agri-environment scheme team.

Dafydd will provide an update to members on NFU Cymru’s lobbying work in the dairy and livestock sectors.

NFU Cymru Ceredigion County Chairman, Glyn Davies said: “I’d like to thank Dafydd for agreeing to join us for our county AGM. I am sure it will be an informative evening with plenty of discussion. All members in Ceredigion will receive meeting joining instructions via email but if you have any queries please contact the NFU Cymru office on 01982 554200. I look forward to seeing you virtually soon.”