The Royal Welsh Show is going online, with the annual event being held virtually in light of the Coronavirus restrictions. Each year NFU Cymru hosts a series of policy seminars at the flagship event - and this year is no different.

This year’s Royal Welsh Show, which is taking place between Monday 20th and Thursday 23rd July, may be slightly different to the normal event farmers know and love, but NFU Cymru is adopting the spirit of ‘the show must go on’ to once again host its popular series of seminars.

NFU Cymru President John Davies said: “The Royal Welsh Show is the one of the highlights of the agricultural calendar and for many farmers the show provides a chance to get away from the farm and catch up with friends from across the country. While it is understandable that the show cannot take place in its usual form this year, I am pleased that there will be a virtual event.

“I am delighted that at NFU Cymru we are still able to host our series of popular policy seminars to add to the virtual Royal Welsh Show offering. We have a great line up of speakers, with our seminars focusing on politics, women in farming and the red meat supply chain. I hope that people from across the country will register and join us for these informative and thought-provoking events.”

On Monday 20th July NFU Cymru President John Davies will be in discussion with the First Minister, the Rt Hon Mark Drakeford MS. At this pivotal time for Welsh agriculture with our departure from the EU's single market at the end of the year and Welsh Government developing a new agricultural policy, there is much for the pair to discuss.

Following last year’s successful event, Tuesday 21st July will see the return of ‘She Who Dares…Farms’. The seminar will bring together women involved with farming businesses to share knowledge, ideas and to raise the profile of women working in the farming industry. This event will feature Caroline Mason, Head of Agriculture at Co-op,; Abi Kay, Chief Reporter at Farmers Guardian; and Tracey Roan from the BBC2 series ‘This Farming Life’.

More information can be found on the seminars, speakers and how to register below Following a successful and well attended Brexit seminar at last year’s Royal Welsh Show,  Wales’ First Minister, The Rt Hon Mark Drakeford MS, has kindly agreed to join NFU Cymru once again for an on-line seminar on Monday 20th July at 11am, on what would have been the first day of the 2020 Royal Welsh Show.

Although much has happened in the last year, we have little if any certainty about what our future trading relationship with the EU27 will look like after 31st December 2020.  There is also the all-important question of what future farming and food policy in Wales will look like, particularly in light of the disruption caused to our supply chains by the coronavirus pandemic. NFU Cymru invites you to join our President John Davies in discussion with the First Minister as together they explore these important issues.

John Davies farms with his family in Merthyr Cynog, near Brecon. He is married to Menna with two children, Sioned and Brychan. He has 100 suckler cows, 1,000 ewes, and runs a silage contracting business and holiday accommodation.

John is currently club leader of his local Pontfaen YFC and a community councillor. He was President of the Royal Welsh Agricultural Society in 2012 and currently sits on the RWAS Board of Management.

Mark became the Member of the Senedd for Cardiff West in May 2011. He was Chair of the Assembly’s Health and Social Care Committee from July 2011 - March 2013 and of the All-Wales Programme Monitoring Committee for European funds from July 2011 – March 2013. He was appointed Minister for Health and Social Services in March 2013. He was appointed Cabinet Secretary for Finance and Local Government in May 2016. Mark was appointed Cabinet Secretary for Finance on 3rd November 2017. On 12th December 2018 Mark was appointed First Minister of Wales and became a member of the Privy Council on 13th February 2019. The ‘She Who Dares…Farms’ conference returns to the NFU Cymru Royal Welsh Show calendar this year with yet again, a fabulous line up. Taking place on Tuesday 21st July 2020, at 3pm, everyone is invited to join our virtual event, featuring three speakers.

We are delighted to have Tracey Roan join us, following her family’s appearance on Series 2 of BBC2’s This Farming Life. It is great to see positive media coverage and positive farming stories. Caroline Mason, Head of Agriculture at the Co-op, has an impressive farming heritage anchored in her family’s rural Shropshire roots, and today, aged just 37, oversees the community retailer’s agricultural strategy. Abi Kay is chief reporter at Farmers Guardian, where she spearheads the magazine’s politics coverage and co-hosts the Ploughing Through Brexit podcast. Abi never shies away from a good farming story and taking farmers views forward, featuring on BBC Breakfast and giving a true grit of farming.

Get involved throughout the day, by tagging us in your #SheWhoDaresFarms #HiSynMentroSynFfermio merchandise pictures on twitter @NFUCymru

Delyth farms with her parents and brother on the Pembrokeshire/Carmarthenshire border. The mixed farming business includes dairy cows, followers, with all beef calves reared to finishing. Delyth is on the NFU Cymru Next Generation Group. She is a Harper Adams University graduate and has previously worked for St Merryn and ForFarmers.

Tracey is married to Steven who, along with his family are into the sixth generation of dairy farmers. Steven and Tracey farm at Boreland of Colvend, near Dalbeattie, with their family Andrew and Lucy and they milk 210 pedigree Holstein Cows. As a family, they featured in the BBC hit series, This Farming Life. Tracey and her sister-in-law diversified, first with a milk shake bar which was originally a 3x3 gazebo and pallet bar but now they have progressed to wheels and converted a horsebox – affectionately known as the Udder Bar. Tracey is also heavily involved with the Dumfried and Galloway Dairy Womens network which is supported by NFU Scotland.

Caroline comes from a farming background in rural Shropshire which motivated her to go on to study at Harper Adams University College. She has gained a variety of experience over the last 15 years working across the Agri-Food and Retail sector. This has given her a fascinating insight into a range of food production systems from tropical fruit to British farming closer to home. She is now responsible for Co-ops Farming, Fisheries and Sustainability where she can drive her passion for food, farming, our cherished environment and our wellbeing, acting together to be agile and adaptable to ensure a sustainable food future for people and the planet.

Abi Kay is chief reporter at Farmers Guardian, where she spearheads the magazine’s politics coverage and co-hosts the Ploughing Through Brexit podcast. Prior to working for Farmers Guardian, she was government and parliamentary affairs adviser at the NFU, and before that she worked as a policy and communications adviser to a rural MP. 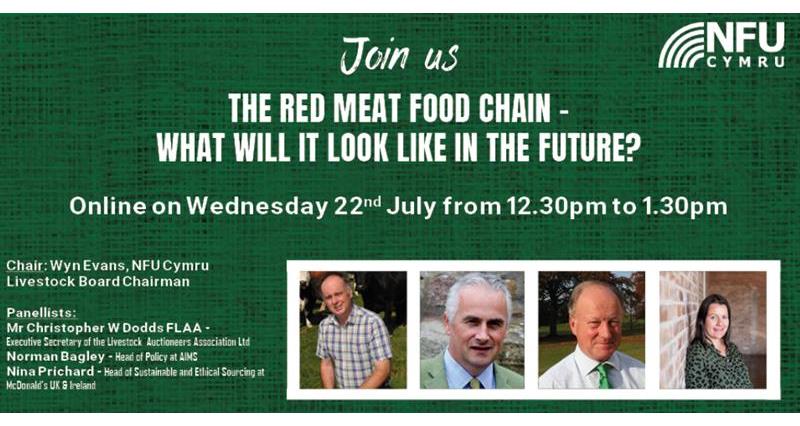 Never has our food chain be more in focus than it has over the last three months. Often complex and vulnerable, the red meat sector is no exception. This seminar will concentrate on lessons learnt over the past few weeks and what we need to do move forward as an industry, that is a highly important in rural Wales. It brings together Wyn Evans, NFU Cymru Livestock Board Chairman, a sheep and beef producer from the heart of Ceredigion, Chris Dodds, Executive Secretary of the Livestock Auctioneers Association Ltd, Norman Bagley, Policy Director for the Association of Independent Meat Suppliers (AIMS), and Nina Prichard, Head of Sustainable and Ethical Sourcing at McDonald's. Between them they have an in-depth knowledge of the food chain from farm to fork and a clear vision of where we need to go in future. Join us to listen to short presentations from each and there will be an opportunity for questions.

Wyn Evans farms an upland beef and sheep unit near Aberystwyth, in partnership with his wife and children. His main enterprise is a 400 head improved welsh ewe flock as well as 40 aberfields and a small flock of poll dorsets. The sheep are run alongside a dozen cows and 40 calves on powder milk. All farm work is done in-house except for shearing and hedge cutting.

Outside of farming, Wyn enjoys vintage machinery, keeping an eye on politics and tinkering in the workshop.

Christopher was brought up in Northumberland on a dairy farm. He entered the livestock auctioneering industry in 1980 and was a practicing livestock auctioneer until 2006. In 2002 he was appointed as Executive Secretary of The Livestock Auctioneers’ Association (LAA). The LAA represents, supports and promotes the 121 active livestock markets within its membership, ensuring that the red meat sector can thrive through the services they provide, most importantly through open, transparent and competitive trade. LAA members sold in excess of 10 million sheep, 1.35 million cattle and 110,000 pigs in 2018 (value of £1.7 billion), of which seven million sheep, 350,000 cattle and 90,000 pigs were sold through their slaughter markets to local butchers, retailers and wholesale abattoir operators. In an independent survey conducted in 2017, 97% of livestock keepers participating in the survey had used a livestock market in the preceding 12 months.

Since establishing the Association of Independent Meat Suppliers in 2001 Norman has become a well-respected figurehead on behalf of industry. Never afraid to challenge the regulators his robust no nonsense approach on behalf of industry has won him many plaudits. From Farm Gate to Kitchen Door AIMS members across the UK benefit daily from his understanding of the issues which face modern day meat processing and his expertise in lobbying on their behalf.

Nina is Head of Sustainable and Ethical Sourcing for McDonald’s UK and Ireland. Her role involves overseeing sustainability throughout the business, with a focus on agriculture, environment and the sustainable sourcing of food and packaging which contributes to annual supply chain spend exceeding a billion a year. Nina has been with the McDonald’s business since 2011 and previously held the positions of Agriculture Manager delivering the long-term programme, Farm Forward and Purchasing Manager responsible for the procurement of food and paper, as well as building long-term partnerships with suppliers. Nina is currently the Professional Adviser for Harper Adams University and previously worked for the Welsh Government as Senior Research and Development Adviser.

All seminars will be held virtually and those wishing to attend must register with NFU Cymru in order for joining information to be sent out.

Please contact the NFU Cymru office on 01982 554200 or email [email protected] stating which seminar you would like to register for and the best email address to send the joining link to.

We look forward to welcoming you all virtually to this year's NFU Cymru Royal Welsh Show offering.