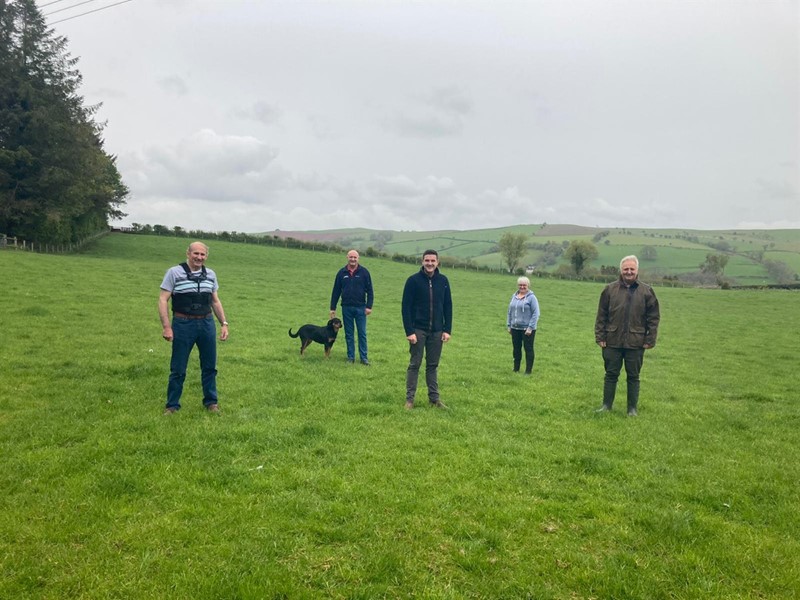 During the meeting, Mr Evans, the Shadow Minister for Mental Health, Wellbeing and Mid Wales, discussed a number of topical issues, including hearing first-hand the impact bovine TB was having on farming businesses.

“Bovine TB is a devastating disease and farmers have battled with so much in isolation during the pandemic. I am concerned many have shouldered the burden privately especially over the last 14 months and the impact this may have had.

“Rural isolation in counties like Brecon and Radnorshire is a reality. Dealing with a bovine TB herd breakdown is hard, financially and emotionally. I do worry that the lack of agricultural shows and social gatherings will have an impact on farmers and their ability to reach out to friends and colleagues for support. On top of this we are seeing banks working on reduced hours and local schools facing closure, which further suffocates the number of avenues where people would go to talk and communicate. Many farmers will have worked tirelessly for extended hours with skeleton staff, to reduce risk, and there is no doubt their wellbeing is being tested.”

Mr Evans said: “The growing problem of rural isolation in constituencies such as Brecon and Radnorshire have been exacerbated due to lockdown, with many shouldering the burden alone and suffering in silence.

“As a community we must realise bovine TB can strike and have a devastating effect on someone’s livelihood and mental health.

“In my new role as Shadow Minister for Mental Health and Wellbeing, I plan on meeting with those affected and the relevant stakeholders, to look at what can be done going forward to ensure this sort of damage both financially and physically is limited. We must find a way of helping those suffering with the impact of diseases such as bovine TB.”

Another issue raised during the meeting was the lack of rural broadband and mobile coverage in rural areas. A recent survey run by NFU Cymru, the National Federation of Women's Institutes-Wales, CLA, Farmers’ Union of Wales and Wales YFC, showed that over 50% of respondents from a rural area in Wales felt that the internet they had access to was not fast and reliable. Furthermore, when describing the mobile signal in their house, 57% of those from a rural area stated that their signal was ‘unreliable’.

Brecon and Radnor NFU Cymru Vice Chair, Sharon Hammond said: “We have really missed our face-to-face county meetings - a place for people to come along and hear of the union’s work and for members to share their experiences or frustrations. During our virtual meetings, we have missed some core members who have no way of dialling in to join us, so we do need to recognise that connectivity is a huge issue in rural areas.

“It is vital the new Welsh Government and the Senedd recognise there are pockets with no broadband coverage at all. We are increasingly seeing access to grant schemes, Welsh Government communication and animal traceability all moving online and it is so important that those in remote areas are not forgotten, excluded or penalised through no fault of their own.”