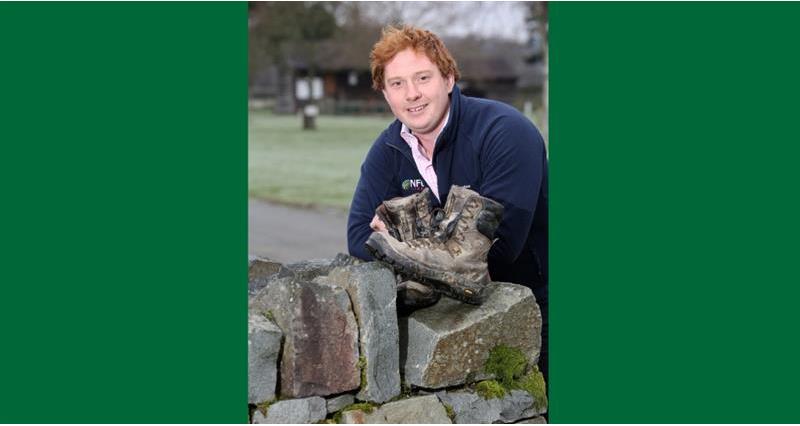 A member of NFU Cymru’s Next Generation Group will climb nine of the UK’s highest mountains in just 72 hours to raise funds for a mental health charity supporting people in rural communities.

Matt Launder, a 26-year-old sheep farmer from Llanerfyl in Montgomeryshire, Mid Wales, will tackle the gruelling climbing challenge to raise funds for the DPJ Foundation, the charity set-up by Emma Picton-Jones in memory of her late husband, Daniel, who took his own life after a prolonged battle with his mental health.

While agriculture is a hugely exciting and dynamic industry to be a part of, it’s also a career that can bring enormous pressure and accentuate isolation – factors that can adversely affect mental wellbeing. Agriculture remains one of the sectors with the highest rate of suicide amongst its workers – figures suggest one farmer a week takes their life. The DPJ Foundation aims to breakdown the stigma that surrounds mental health and provides support services for people in rural communities affected by mental health, especially those working in agriculture.

Now Matt, accompanied by his brother, Dan, and brother-in-law George Collins, is aiming to walk around 76 miles of ascents and descents in 72 hours to support the work of a charity providing a vital service to the rural community in Wales. The trio will be supported by Matt’s other brother-in-law, Gareth Owen, who will be driving the group some 1,300 miles between peaks over the course of the challenge.

Matt explained: “Farming isn’t just a job; it’s a way of life. While there are so many aspects of it that are enjoyable, like knowing you’re helping to feed people while also caring for your local environment, farming does also bring significant challenges. There are times when it can be a lonely venture, while the pressures of running a business when there are so many external factors that can impact on your farming enterprise that are out of your control can also add to stress levels.

“Despite the challenges and difficulties we experience, many farmers do not open up about the effect that it has on their mental health, bottling up those anxieties and concerns. As an industry we need to stop this being a taboo subject and instead encourage one another to open up about the things that can affect our wellbeing."

“The DPJ Foundation is still a relatively fledgling charity but they have already made an incredible difference in this field. I think the work that Emma and her team of volunteers are doing to support farmers and our rural communities is absolutely outstanding and I wanted to take on a challenge to support this worthy cause.”

Matt’s challenge will begin on Thursday 13th June when he begins climbing Ben Nevis, the UK’s highest peak, at 6pm and walking through the night. From Ben Nevis he’ll travel on to Ben Macdui and Ben Braeriach in Scotland, Scafell Pike, Helvellyn and The Old Man of Coniston in England, before scaling Snowdon and Cader Idris in Wales. Matt hopes to finish his intrepid charity challenge by climbing Pen y Fan at around 4pm on Sunday 16th June, where he hopes supporters will join him for the final leg of his mammoth journey.

Matt explained: “I’m just about to approach lambing, which is one of the busiest times of the year in the farming calendar, but I’m also squeezing in as much training as I can. In order to walk all nine mountains within 72 hours we’re going to be walking for over 20 hours every day – the only rest we will get is in the car as we’re driven between peaks – so I’m under no illusions about how physically demanding this is going to be, but it’s for an extremely important cause so I’m sure the pain and blisters will be worth it!

“Every £37 we raise will help fund a session so that a farmer can receive support from the DPJ Foundation, so we’re hoping to raise as much as possible and fund as many sessions as we can.”

To sponsor Matt’s mountain climbing efforts please search for ‘Matt Launder’ on www.gofundme.com. If you are a corporate sponsor interested in sponsoring one of the nine peaks, supporting the logistical side of Matt’s mission with donations or support with food, fuel or clothing, or perhaps interested in joining Matt on a leg of his adventure, email bGF1bmRlcmZhcm1AZ21haWwuY29t for further details.

To find out more about the work of the DPJ Foundation please visit www.thedpjfoundation.com. If you are in need of support and would like to speak to one of the charity’s dedicated volunteers call 0800 587 4262 or text 07860 048799.