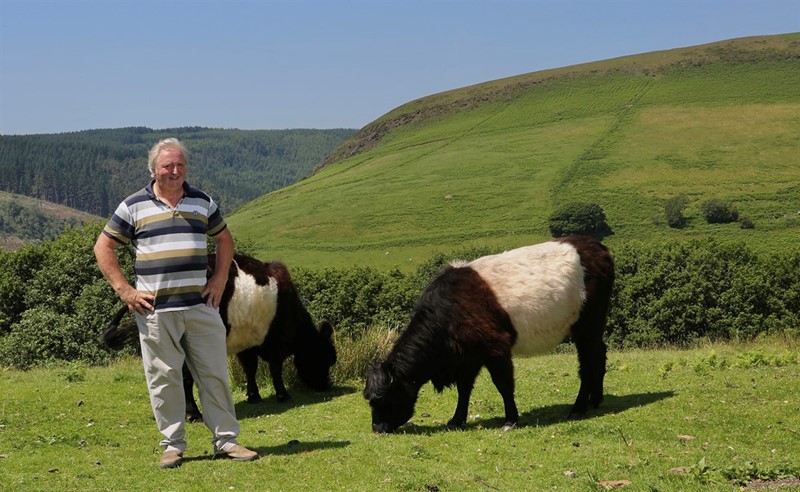 Geraint Watkins’ farm in the Brecknockshire countryside is an exemplar of what a love of nature, combined with the best possible use of agri-environment scheme support, can deliver for wildlife, the environment and soils.

The river valley landscape that stretches out across 300-acre Llwyngychwydd near Llanwrtyd Wells has been farmed by Geraint’s family for three generations and is rich in habitats with an exceptional wealth of biodiversity.

A case in point is a goshawk raising two chicks in a nest built within 80 yards of the farmhouse, alongside a red kite.

The family’s approach to farming is in part a result of its accessibility, or rather its inaccessibility. “We can’t go all out for production because we have a narrow lane access that restricts what we can do,” explains Geraint, NFU Cymru’s County Chairman for Brecon & Radnor.

Over the years, a succession of farm consultants have advised ambitious plans for doubling stock numbers but that would require inputs to be delivered to the farm in lorries that would be unable to negotiate the lane.

But, accessibility issues aside, the family has a desire to work with nature rather than against it, to increase biodiversity at the same time as producing environmentally friendly food.

Geraint’s father had been working as a civil engineer when he took on Llwyngychwydd from his uncle and cousin when they wanted to stop farming.

At that time Geraint was earning a good living off-farm – after studying civil engineering at college he worked for a construction company and was skilled at operating large machines. 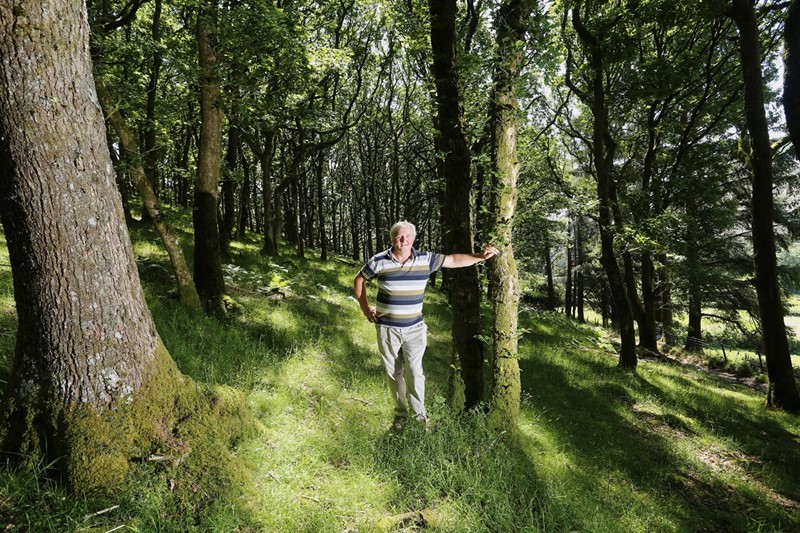 That job took him across the UK from the home in Swansea where he and his wife, Sian, were expecting their first child.

The prospect of bringing their son up in the countryside lured them back to Llanwrtyd Wells.

Moving from the city to the country

The reason for the move was partly a result of Geraint’s own upbringing. “My father had worked away a lot when I was growing up and I didn’t have a very close relationship with him because of that, I didn’t want to bring my children up in that way,” he explains.

At first he combined his new job in the civil engineering department at Powys County Council with helping his father with shearing, dipping, haymaking and other jobs that demanded more labour.

But with a second child on the way and a desire to increase income, Geraint gave up his council job and developed his own forestry business.

He was advised to consider forestry because it was sustainable and that has indeed proved to be the case.

“When a tree is cut down another is planted and in 30 years’ time that tree will be harvested, it is a sustainable cycle,” he says.

Geraint bought a saw and initially worked as a timber contractor in a forestry gang, a job that gave him flexibility to help on the farm.

As the Forestry Commission developed there was demand for gangmasters, therefore Geraint and four others set up as equal partners to pool resources to buy specialist machines. 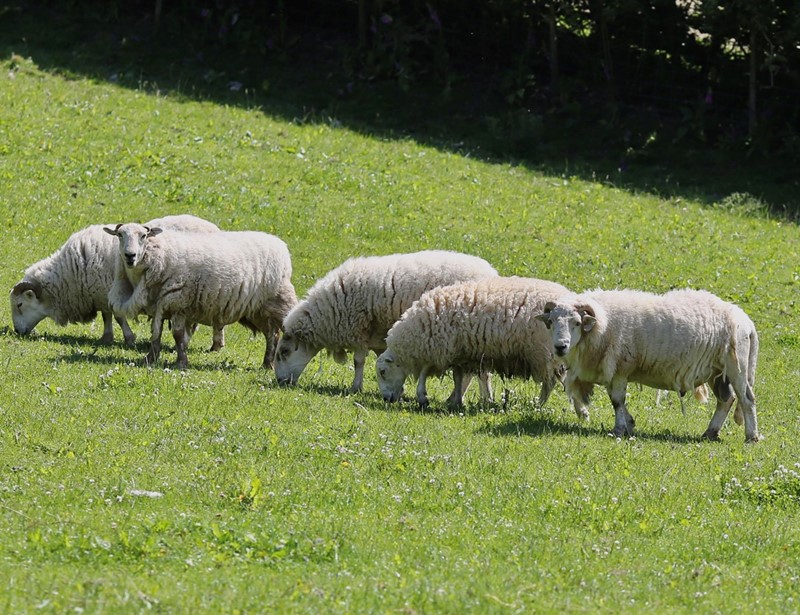 Geraint’s training and background in machinery gave him a head start. That business has flourished and his son, Greg, now runs that gang day-to-day while Geraint steps in as holiday relief or at busy times.

It is a highly skilled occupation and one that satisfies Geraint’s love of big machinery as the business runs a 32-tonne harvesting machine, a 32-tonne extractor with winches, an eight-wheel trailer with an engine for hauling timber from woodland to the roadside, and excavators.

An abundance of trees

Up to four people work within the business, according to the scale of the project, with around 12,000 tonnes of timber harvested for Euro Forest annually.

Geraint’s own farm has an abundance of trees, including two oak woodlands that grew from the stumps of trees felled to provide timber in the First World War, and a Douglas Fir plantation. He admits to mixed feelings about the national drive by governments to plant trees on agricultural ground - perhaps these trees would be better planted on large tracts of bare land without sacrificing productive land, he suggests.

The farm’s Glastir environmental agreement precludes stock from grazing among the woodlands and the thinning of the tree canopy, but Geraint says that creates its own problems.

“It is crucial that we should get some air into woodlands to create an understory growing there but we can’t do that within the confines of the scheme.

“Excluding stock from woodland creates a monoculture, that lack of diversity is the result of poorly thought out agricultural schemes.”

But he is hopeful of change. “I think Welsh Government is probably recognising the faults of previous schemes and seeking to address them.”

Llwyngychwydd and its 300 acres, together with another 120 acres rented on neighbouring farms, supports 400 South Wales Mountain and Aberfield ewes and a small herd of Dexter and Belted Galloway cows.

The flock lambs outside from April 1st with the lambs sold at Hereford Mart in March of the following year. 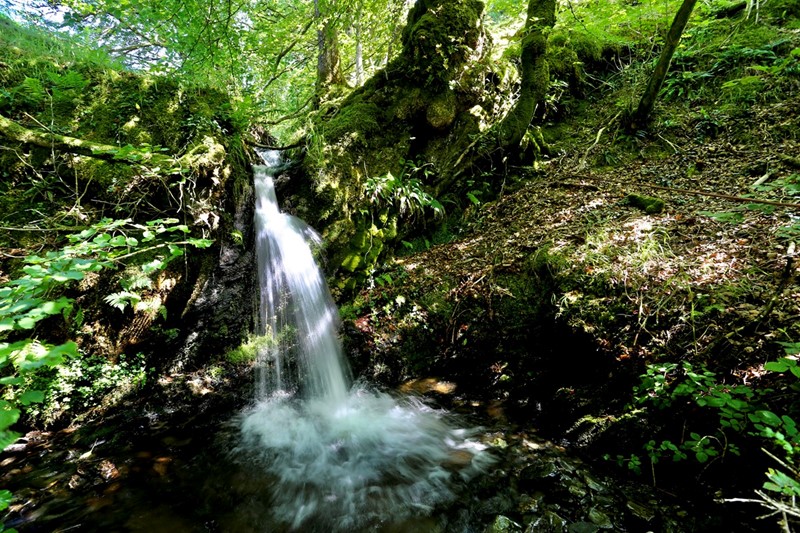 As a high-altitude farm, Llwyngychwydd doesn’t grow grass early, therefore lambs don’t gain sufficient growth from pasture to be sold fat in the same year they are born.

Breeding a sheep that looks after itself

Running the flock outdoors is good for sheep health. “We don’t have to dose or treat for footrot often, it is a sustainable way to produce lamb,” says Geraint.

He is refining the flock to need less attention, by breeding a sheep that looks after itself.

“I think one of the things that puts the next generation off farming sheep is the amount of work they see being done to keep a flock but we can improve that by breeding sheep that don’t need to be regularly brought into the yard and turned over.”

The cattle enterprise is a joint venture with neighbouring families and the group share responsibility for the management of the cows and their progeny.

The income, Geraint admits, is ‘negligible’’ but the cattle are improving soils by adding organic matter. “We need to use tractors as little as possible so we are getting cows to do the job of adding fertility for us.”

The soil is seeing the benefit – it was compacted in places but a greater population of earthworms are loosening up the soil.

Environmental schemes have been a feature of the farm’s business model for 25 years when Geraint’s father first joined a scheme. “I remember when the ESA (Environmentally Sensitive Area) officer would come to the farm and they would spend days looking at the different grass species in hay meadows,” Geraint recalls.

The farm has 17th Century stone field enclosures and there is evidence that no hedges have ever been removed.

As Wales moves towards a new approach to supporting agriculture with government money, the proposed approach of payments according to outcomes is a fair one, Geraint reckons.

“There can’t be a one-size-fits-all scheme, it doesn’t work as we have seen with Glastir,” he says.

“Setting dates for when things need to be done gives people so much anxiety, if you don’t join a scheme you are not going to make a mistake so we shouldn’t penalise people who do join and are doing their best.”

But he also thinks farmers have a responsibility to the taxpayer. “We can’t expect the taxpayer to give us money and to not do anything in return.”