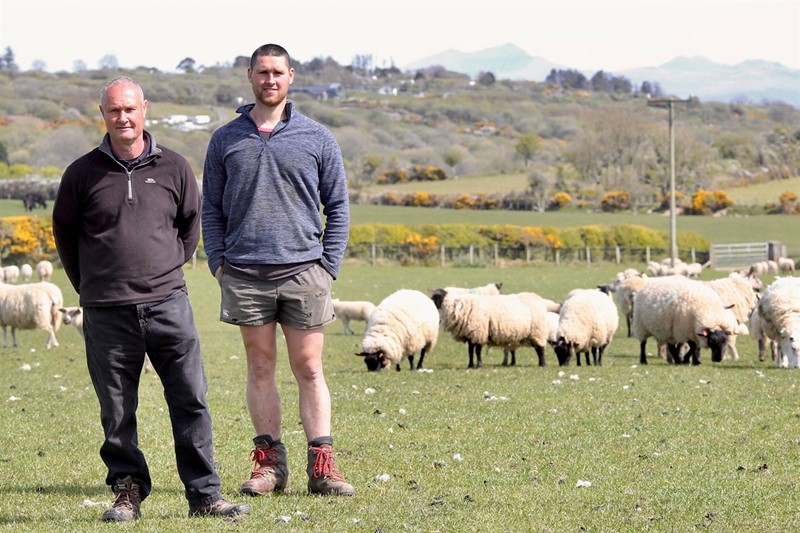 Edward Griffith was just 21 when his parents made him a partner in their farming business, gifting him the freedom to make decisions with the drive and fresh perspective of a new entrant.

After benefitting from that positive experience, Edward and his wife, Jackie, have followed the same path, giving their son Ellis the same opportunity at 21.

Ellis is now the main decision maker on the day-to-day running of the family’s beef and sheep enterprise. “I think it is important for the next generation to become partners as soon as possible,” Edward reckons. “It fuels ambition and allows a business to develop”, he adds.

It has freed up his time to do other things, not least more recently to take on the role of NFU Cymru County Chairman for Mid Gwynedd.

“I don’t have to worry about the cows and the sheep, Ellis takes care of what needs doing and I deal with the paperwork.” 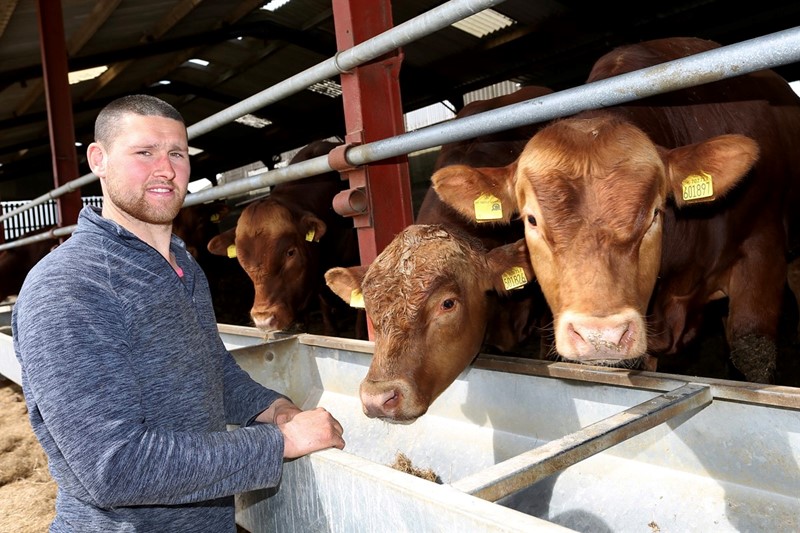 Edward is the third generation of his family to farm on the Llyn Peninsula. His grandfather purchased Tyddyn Gwyn in 1935 and his parents, William and Helen, took over the running of the farm in 1958 and still live in the farmhouse.

“This is when the current business started,” Edward explains.

In 1969 his parents purchased Bodwi which was an adjoining farm and both farms have been farmed as one unit since then.

Edward married Jackie in 1988 and they set up their home at Bodwi where they have brought up their five children.

Bethan, the eldest, is a vet at a local practice, while Lowri is a secondary school teacher who married a local farmer, and they have two young sons.

Ellis was the third and now lives in a cottage at Bodwi with his wife, Cain. Arthur, a civil engineer, currently works in London, and Sera is a trainee accountant with a local firm.

The Griffiths farm 247 hectares (ha) which includes 113ha of rented and owned land on a holding 18 miles from Bodwi.

The farmland is grazed by a herd of 140 Stabiliser cows and their progeny and 1,150 Suffolk-cross ewes and their lambs.

Up until 20 years ago, beef was produced from a commercial suckler herd of Continental-cross cows sired with Charolais and Limousin bulls. That changed when Edward visited America to learn more about the Stabiliser breed.

“We were struggling with calving difficulties and big calves not suckling,” he recalls. 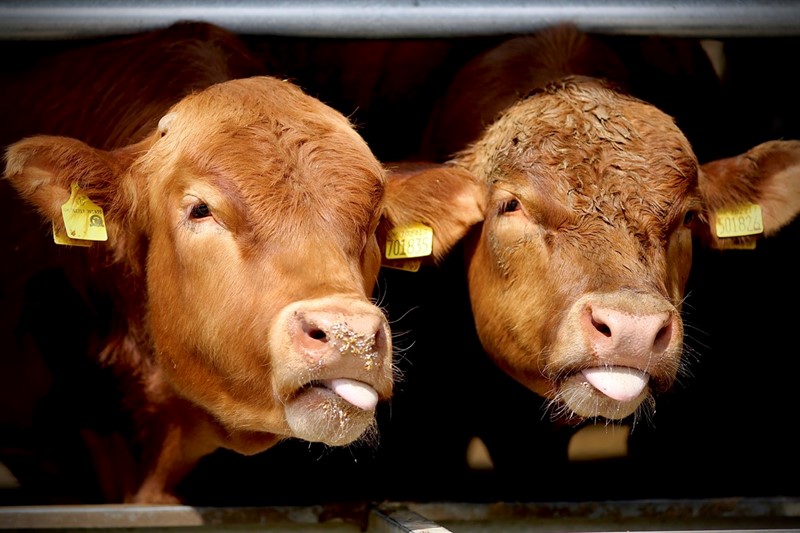 With the Stabiliser’s track record for calving ease and docility and an efficient converter of grass to meat, Edward made the switch and has never looked back.

“We are running more cows now than we were back then, but it takes less time and labour to look after them because they are so easy to manage.”

It is a closed herd and this, combined with a programme of BVD and leptospirosis vaccination, and for pneumonia in calves, means that herd health status is excellent. The farm is also involved in a programme of Johne’s testing with the Scottish University Rural Colleges.

Calving gets underway from 7th April with a target to calve 80% in the first three weeks of the nine-week block.

Post-weaning, heifers are fed silage and some concentrates until turnout in the spring.

A proportion are retained as replacements and others are sold as bulling heifers or in calf heifers. Any animals that don’t make the grade for breeding are fattened on the farm.

Historically, the family had finished half the bull beef progeny themselves and sent the others to a specialist finishing unit in Yorkshire.

But as a result of their project work as a Farming Connect demonstration farm, which established that home-rearing was marginally cheaper, they now finish all their cattle at home.

The business has cut finishing costs further this winter by growing spring barley to include in the ration. 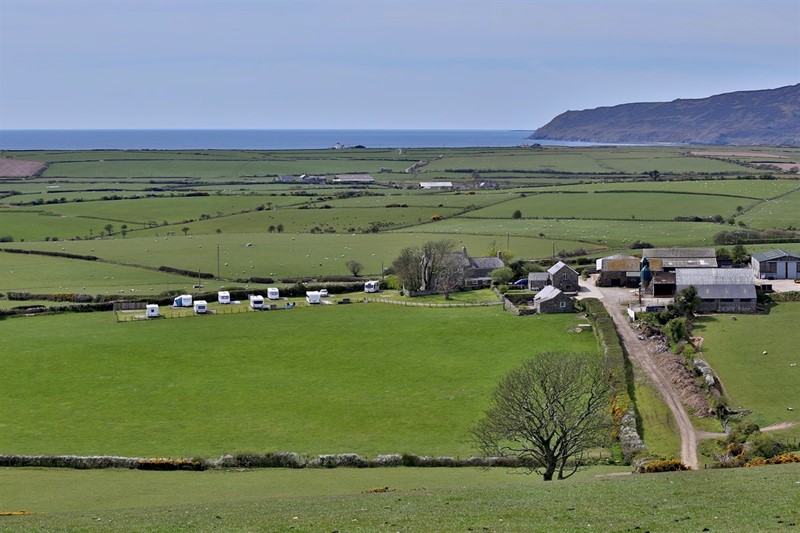 Despite establishment being challenged by very dry weather in 2020, followed by exceptional levels of rainfall in August ahead of harvesting, the 11ha crop yielded around 80 tonnes of grain. Acreage has been increased to 14.5ha this year.

This summer, through Farming Connect, the environmental impact of the business will be measured. “Hopefully it can be proved that this new approach to finishing will have a significant influence on reducing the farm’s carbon footprint,” says Edward.

“We no longer have lorries coming here with feed, no cattle being sent away for finishing and we are finishing at 12-14 months. It should be a reflection of how carbon efficiency is directly linked to profitability.”

Lamb is produced from a flock of 1,150 Suffolk-cross ewes, which are tupped to Abermax or Texel rams and lamb indoors in February.

Creep feeding lambs at grass in April and May means all lambs can be sold by the beginning of September.

Creep feeding takes the pressure off grazing availability too and this has been important with spring grass growth challenged by dry weather conditions for two successive years.

“Last year, by the end of May, we were desperate for rain, but the lambs did exceptionally well because they were eating flat out,” says Edward.

Drafting starts at the beginning of May and 90% are sold by July. The farm supplies the majority of its lambs to Waitrose and has done for the last 20 years.

'A busy season lies ahead'

The family has taken advantage of their picturesque location by diversifying into tourism. Additional farm income is generated from a small caravan site and four holiday cottages.

A busy season lies ahead with the facilities fully booked for the summer and beyond.

Although the Griffiths won’t be taking advantage of the relaxation in planning rules which allows pop-up campsites to operate for 56 days, Edward says with such demand for domestic holidays, it is welcome. 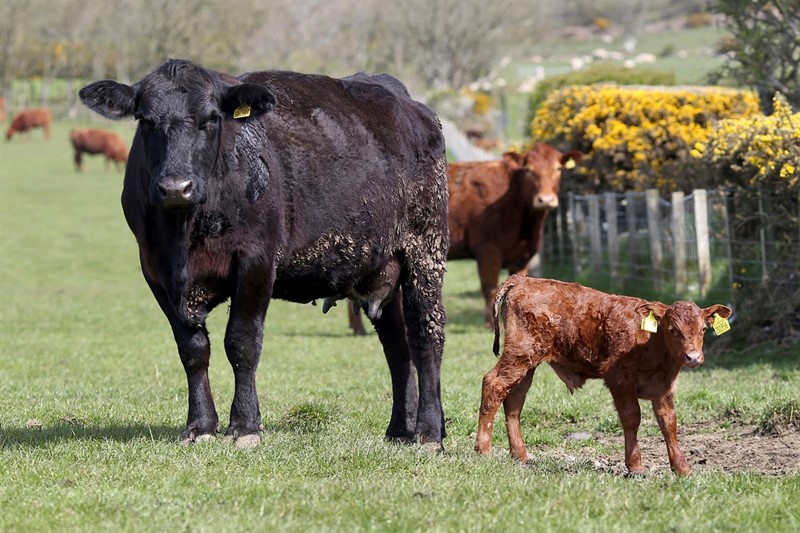 In recent years, a surge in the number of motorhomes parking illegally overnight in the countryside and coastal areas has been a major problem, he adds.

“If more facilities are provided we might see less of this,” he suggests. “I have never seen so many camper vans in this area as there were last year, they were parking everywhere and spoiling the countryside for the enjoyment of others.”

He would like to see a clamp down on parking with heavy fines for those who breach rules.

As NFU Cymru Mid Gwynedd County Chairman, one of the issues now occupying his time is the changes to farm support.

He is critical of the Welsh Government’s White Paper on agriculture, suggesting that the proposals set out in that document demonstrate that the government has not listened to farmers.

“The consultation was a waste of time; the government seem to have completely ignored the feedback they had from farmers.”

He worries that the Sustainable Farming Scheme will see the bulk of much needed funding spent on advisers.

“I don’t see the sense in complicated schemes with advisers going to every farm, it is such a waste of money.”

Edward would like to see opportunities for every farm to access the scheme should they wish to.

“Every farm can do its little bit for the environment and should be entitled to be paid for that,” he says.

“I also worry that the proposals in the White Paper do not take into account the food security of our country or make any attempt to create a mechanism for stabilising incomes in what we all know to be a very volatile industry.”