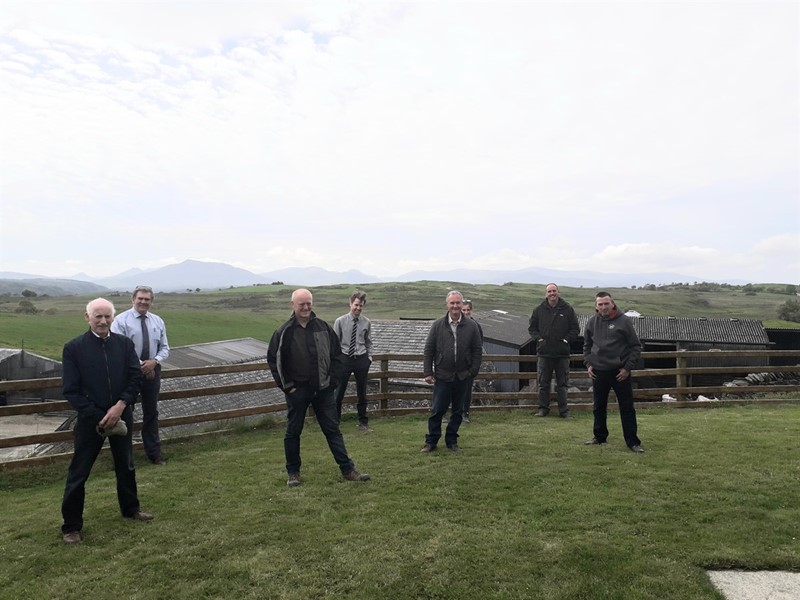 During the meeting, also attended by a small cohort of county officeholders, discussions initially centred around the new Nitrate Vulnerable Zone (NVZ) regulations that have been introduced by Welsh Government and the impact they will have on Welsh farms.

Paul Williams explained to the MSs that he had to make a business decision on whether to invest in additional infrastructure or to change the farming system operating at his family farm. He outlined the work taking place to put a roof over the existing slurry store and an additional slatted facility for housing cattle which resulted in tens of thousands of pounds being invested in a new facility.

“Investing in the slurry store was a huge decision, our farming options are limited at this altitude. Fortunately, we are owner occupiers here, so at least we were investing in our own premises. For tenanted farmers I can appreciate that this kind of investment would not be as feasible. It grates even more to know that water quality in the locality is classified as good and moderate. I look out from the farmhouse at Foel Siabod in the distance, a mountain that has an NVZ designation on it where water quality has never been an issue, this is the absurdity of an all-Wales NVZ designation.”

Janet Finch-Saunders MS said: “The Welsh Conservatives have been clear in their opposition to the introduction of a Wales wide NVZ designation. Our visit today clearly demonstrates how financially demanding these rules are on farm businesses. Welsh Government’s own regulator, Natural Resources Wales (NRW) have clearly stated that an increase up to 8% of Wales’ land area would be sufficient to address the current challenges to our watercourses. Here in Aberconwy we have a high proportion of tenanted farms and the unfair pressure currently being put on these business owners is wrong.”

During the meeting, members also highlighted the recently announced amendments to bovine TB testing rules due to come into effect in Conwy between 1 June and the autumn. The new rules would see additional testing becoming a requirement for what has been identified as a Low TB area since 2017.

Nationally 9,762 cattle were slaughtered due to bovine TB in 2020. This remains a stubbornly high figure within Wales and calls were made to look at controlling TB in the round, seeking to address the disease in all vectors.

Sam Rowlands MS said: “This meeting was an excellent opportunity to get out on farm and discuss some of the real issues that face our farming community here in north Wales and to see the practicalities of how national policy is affecting my constituents on a day-to-day basis. I hope that over the coming term of the Senedd that I will be able to represent the farming community down in Cardiff. On-farm visits provide a valuable insight.”