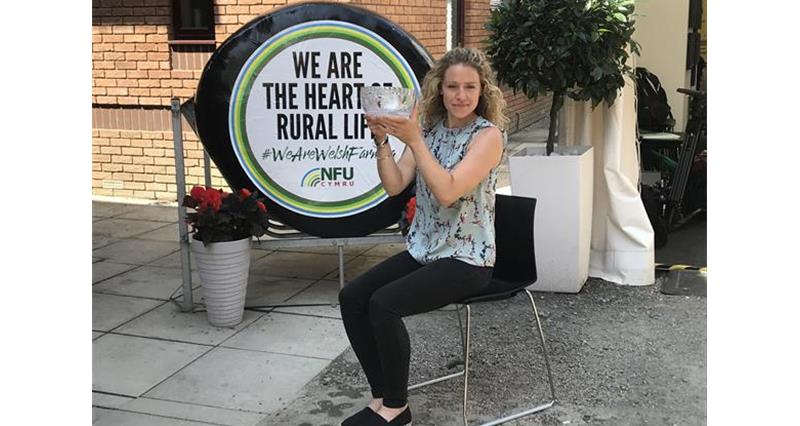 Nicola Drew, a beef and sheep farmer from Trefecca, near Brecon, has today (Thursday 25th July) been announced as the NFU Cymru/NFU Mutual Wales Woman Farmer of the Year at the Royal Welsh Show.

The award, now in its 23rd year, seeks to champion the contribution that women make to the agricultural industry and to raise the profile of women in farming.

Nicola farms in partnership with her dad, after she decided to leave her job in performing arts and come home to take over the running of the family’s Trefecca farm. She re-built the farm and now has around 240 acres of land, as well as renting 40 acres. She runs a successful beef and sheep enterprise and is the key decision maker on the farm. She has a hands-on approach to the management of the land in order to maximise productivity levels, and conducts soil testing and uses a rolling programme to reseed less productive pastures. She is an active member of Brecon Grassland Society where she has gained knowledge to help the process of ley improvements and grassland management.

Nicola manages the day-to-day handling, treatment, feeding and management of the livestock, as well as completing the records of animal ages and breeding histories. She deals with the veterinary and animal health issues as well completing the buying and selling of stock.

Nicola has participated in a national benchmarking scheme, producing industry-wide data for comparison purposes. She is also a member of industry-based discussion focus groups and has completed a number of Farming Connect training courses.

Away from the farm, Nicola milks three mornings a week on a nearby dairy farm. She is also a member of the NSA ‘Next Generation’ group and acts as an ambassador for them by promoting sheep farming and lamb and wool production. She is a keen advocate for the involvement of the next generation in farming. She also represents her local hockey and netball teams and is the current Chairman of Gwernyfed Hockey Club.

NFU Cymru Deputy President and competition judge, Aled Jones, said: “It gives me great pleasure to announce Nicola as the winner of the 2019 Wales Woman Farmer of the Year Award.

“After visiting the farm it is clear Nicola has played an active role in the development of the business for the last nine years. The fact that she gave up her successful career in performing arts to come home to the farm shows her commitment to the industry, and the family farm. I was extremely impressed with her dedication and passion for farming, her hunger to learn, undertaking courses and training to ensure she gets the best from her business. Nicola’s win shows all those women who want to farm that anything is possible when you set your mind to it.”

Fellow judge, and representative of the award sponsors, NFU Mutual, Sioned Mair, who is an NFU Mutual Senior Agent and NFU Cymru Group Secretary in Llanrwst, added: “I was really excited when I was asked to judge this competition alongside Aled Jones. I was extremely impressed with the standard of all the farms we visited across Wales as part of the judging process. It was an extremely tough decision to make, as the standards of entries were so high, but I would like to congratulate Nicola on coming out on top. Her passion for our industry and commitment to running a successful farm, as well as promoting farming to the next generation of farmers, makes her a fantastic ambassador for female farmers all over Wales.”

Nicola was presented with a Welsh crystal engraved bowl and £500 prize money to mark her achievement.