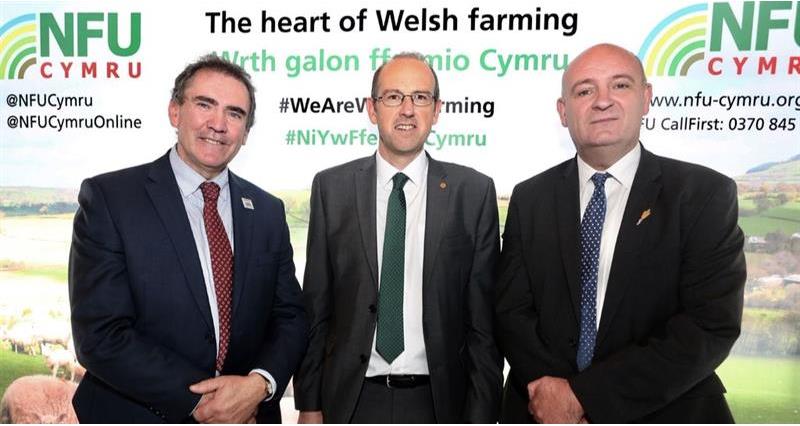 NFU Cymru members and Assembly Members have been celebrating the role that Welsh farmers play in producing nutritious, high quality, safe affordable food during an event at the Senedd on World Food Day.

The lunchtime event, kindly sponsored by Llyr Gruffydd AM, provided an opportunity for those present to enjoy a special menu featuring a range of fine Welsh produce.

Speaking at the Senedd, NFU Cymru President John Davies said: “Today is the UN’s Food and Agriculture Organisation’s World Food Day, which provides us with the perfect chance to recognise all those in Wales who play their part in putting nutritious, high quality, safe and affordable food on our table. From the farmers who nurture the land and produce a range of top quality products from it, to Welsh food and drink processors who turn these raw ingredients into a finished product, they are all part of an industry worth £6.8bn to the Welsh economy annually and which provides employment to over 217,000 people.

“Despite the way in which some individuals and organisations have used the media to attack and undermine what we do, Wales’ farmers have a great story to tell. Our geography and climate mean that we have optimal conditions for growing grass and turning that into high quality protein in the form of PGI Welsh Lamb and Beef, as well as a range of dairy products. At the same time our livestock grazing systems are also storing up carbon to help mitigate the impacts of climate change and creating and managing our iconic Welsh landscape.” 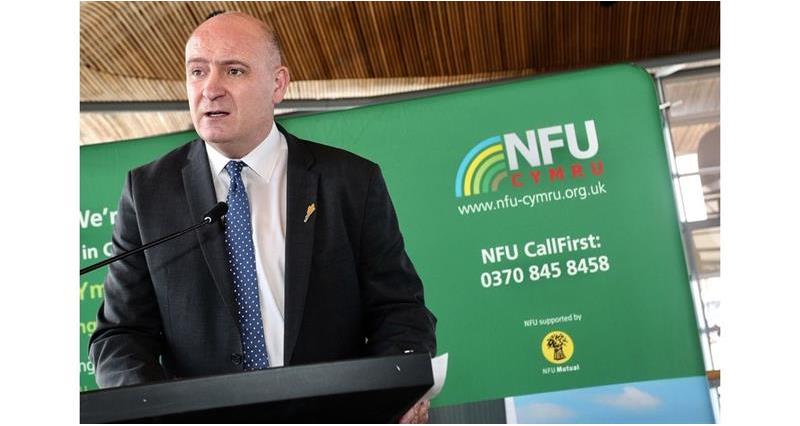 Mr Davies also outlined the union’s ambitious target of reaching net zero emissions from agriculture by 2040, and talked about the ‘Brand Cymru’ concept, which would seek to maximise the value of sustainably produced food from Welsh farms by ensuring that all partners in the supply chain were able to capitalise on Wales’ unique selling points.

With negotiations between the UK Government and the EU still ongoing in Brussels, Mr Davies was emphatic in putting across the union’s view that if the UK does leave the EU, then this must be done in an orderly manner so as to avoid a catastrophic outcome for Welsh agriculture.

Of particular concern to Mr Davies and NFU Cymru was the prospect of the tariffs which would bite in the event of a ‘No deal’ Brexit.  He said: “With our exports of beef, lamb and cheddar into the EU27 suddenly subject to tariffs of 84%, 48%  and 57% respectively, there is no way in which we would be able to compete in the European marketplace; we will find ourselves priced out of our nearest, largest and most valuable export market.  At the same time, and because of the UK Government’s decision to uphold its tariff schedule last week, agri-food products will be coming into the UK from the EU27 and the rest of the world with tariffs partially or totally removed. This represents an entirely unbalanced arrangement.”

Mr Davies then went on to raise the issue of standards, describing how Welsh farmers were both pleased and proud to uphold the highest standards of animal welfare and environmental protection, but that these should not be allowed to be undermined by imports produced to lower standards. He said: “A ‘No deal’ Brexit will be catastrophic for Welsh agriculture, not least because of the implications of the tariffs and the risk that our standards will be undermined.  No amount of preparation or contingency planning can mitigate the effect of ‘No deal’ on our sector, that is why it is so crucial that we do not leave the EU without a deal.”

Thanking those present for attending the event, Mr Davies added: “We share a vision for a productive, progressive and profitable farming industry in Wales and we look forward to your continued co-operation to help achieve this shared ambition.”