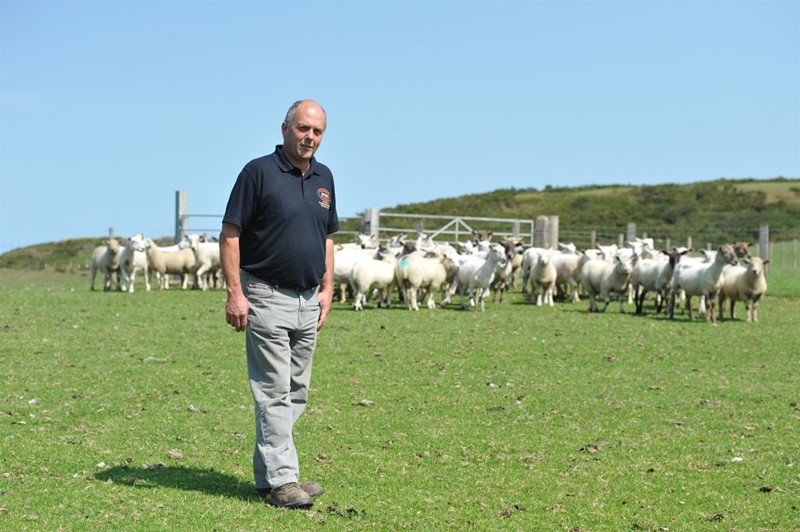 At 18, Glyn Davies staked his future on an International 784 tractor as he set up a business as an agricultural contractor.

It was a significant investment for a young man but the gamble paid off as nearly four decades later, one tractor has become three as he continues to run a thriving contracting business alongside farming sheep.

“I have got clients that I have been contracting for since the very beginning,” says Glyn, who farms at Penlan, near Llanrhystud.

A farmer’s son, he grew up on the family farm at Penrhyn-coch and set his sights on working in the industry.

His local machinery dealer was very supportive and this enabled Glyn to secure finance to buy a tractor. “He helped me out a lot to get started and I will be forever grateful for that.”

Glyn’s business grew when he invested in a direct drill. “It was a Hunter’s rotary seeder, the only one in this area, and for that reason it got me a lot of work.”

He then moved into baling big bale silage and hedge trimming and now divides his time between these jobs and running two flocks of breeding ewes.

Penlan is his wife, Eleri’s, family farm. They moved there in 1998, two years after they were married.

Eleri’s brother, Gareth, had farmed Penlan initially but left when he married and relocated to his wife’s home farm.

“They got married on the Saturday and we moved in on the Sunday,” Glyn recalls. 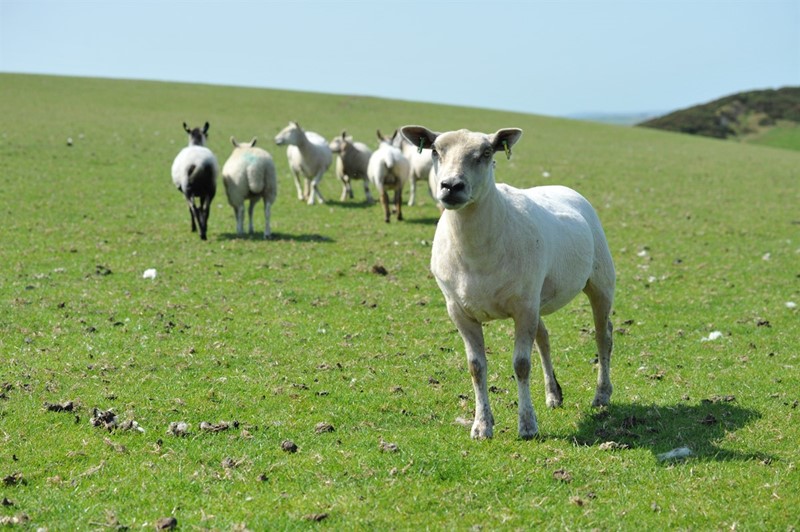 He and Eleri bought the 85-acre coastal farm where they have a flock of 250 lowland ewes and run a further 250 Welsh Mountain ewes at Penrhyn-coch.

Both Glyn and Eleri work off-farm – for 27 years Eleri has worked as a nurse on the children’s ward at Bronglais Hospital, Aberystwyth.

They have two sons, Dewi and Ifan; Dewi has graduated with a degree in agriculture from Aberystwyth University and is intending to pursue a career in agriculture and 18-year-old Ifan has set his sights on working in the family business.

Until 2006, lambing was spread between the two sites which made life complicated and busy, as for Glyn it meant a 28-mile round trip to oversee the flock at Penrhyn-coch.

To ease management, a new sheep shed was erected at Penlan later that year to allow the flock from Penrhyn-coch to lamb there.

Aside from the time saving, it has resulted in a reduction in lambing losses. A second shed was built three years ago.

Glyn would like to have a higher stocking rate at Penlan but the south-facing farm has shallow soils and grass on the steep slopes which burns off quickly in a dry spell.

“Some people would say that 250 ewes on 85 acres isn’t enough but that is the number we can graze, especially in a year like 2020,” he explains.

Grass availability was very tight that spring until some much-needed rain fell in mid-June. “We were looking for every spare blade of grass but we got there by the skin of our teeth,” says Glyn.

Ewes are housed for four to five weeks before lambing gets underway in mid-February.

A focus on improving silage quality in recent years, by using soil analysis and acting on it to correctly apply fertiliser and lime, has resulted in a 30% reduction in concentrates fed.

Ewes are turned out with their lambs immediately after lambing. “We don’t creep feed in the spring, if everything goes according to plan the grass is growing from mid-February onwards,” says Glyn.

The first draw of lambs is at the beginning of June – so far, 40 have been sold to Dunbia as part of the Wales YFC Scheme.

“We get an extra £1 a head for the lambs if they hit spec and it keeps the boys interested, picking the lambs to be sold,” says Glyn.

Most lambs achieve a fat class of 2 and 3L, U and R conformation at an average carcass weight of 18-19kg from grazed grass only.

Improvements are continually being made to the flock, not least since the boys have become involved.

“They spend time picking the right rams to go on the ewes and we have taken advantage of the Farm Business Grant to buy weighing equipment and an electronic reader,” says Glyn.

“We now weigh every two weeks following weaning, and can keep track of the lambs and pick them at the optimal time.”

For the contracting business, July is the busiest month – as many of Glyn’s clients are upland or hill farmers this is when they take their only crop of silage.

He runs three tractors so that Dewi and Ifan can help with the contracting.

Although farm machinery has got bigger he still runs smaller machines, because of the nature of the farms he works on.

“A lot of the big kit that is now available wouldn’t get up and down the lanes,” Glyn points out.

Contracting has given him an insight into the changes that are taking place in farming.

“There are a lot less cattle around so a lot less silage being made. Farmers have moved away from suckler cows to sheep only, probably because they think sheep are easier but you can spend a lot of time looking after sheep!”

Additional income is generated by a mobile telephone mast, erected in 1996 before Glyn and Eleri took on the farm. “I could never make as much money from running sheep on that piece of land!” Glyn admits.

The farming industry knows it must improve its health and safety record and Glyn is at the forefront of educating farmers on protecting themselves and their workforces.

When the Agriculture Training Board was in existence he trained farmers to drive tractors safely on slopes. He is now a Farming Connect Farm Safety Mentor and the Wales Farm Safety Partnership Ambassador.

Glyn’s message to farmers is simple: “Take time, think and be aware of what you are doing.”

It was a message he took on board recently when he was working in the fields one evening. “I was on a slope and the dew was falling and I could hear the tractor wheels starting to screech as the grass became slippery so I knew it was time to stop, even though it wasn’t dark. It is noticing things like that that can keep farmers safe.”

One of the issues farmers are up against is that they must be multi-skilled. “We have to be vets, builders, mechanics, tractor drivers, we do everything, and because we are often working alone there is no-one else to guide us. When we try to do every job we can’t be masters of everything and when we are under pressure we often take shortcuts,” Glyn acknowledges.

He plays an active role in the farming community – he is a member of the North Cardiganshire Ploughing Association and was vice-chairman when the county hosted the All-Wales Ploughing Championships at Llanon in 2012. That competition is due to return to the same site in the next few years.

As NFU Cymru County Chairman of Ceredigion, Glyn’s involvement in farming issues takes him beyond his farm gate.

He worries that politicians have short memories, reflected by the way they have voted on the Agriculture Bill. He hopes that the public’s memories won’t be as short.

“Hopefully people will remember who they called on during the current crisis, that farmers were there for them.”

The future for his sons and the next generation of farmers relies on the UK securing a good trade deal, he suggests.

“The country needs food producers. Is it the government’s aim to have a two-tier system where we have cheap food from abroad and high-quality home-produced food? There should be a single food quality standard for everyone, if it is not produced to our standards it shouldn’t be sold in this country.”

New successor schemes to the Basic Payment Scheme should give recognition to the role farmers play in the community, culture and the preservation of the Welsh language and the employment they generate, Glyn reckons.

And he believes farmers should perhaps be willing to give something in return.

“I wouldn’t like to see open access but do we need to perhaps allow people to come and see what we are doing, say at lambing time, rather than shutting the gate and keeping ourselves on one side and the public on the other.